"Fun Home": a Broadway musical about a young adult lesbian who explores the life of her deceased gay father 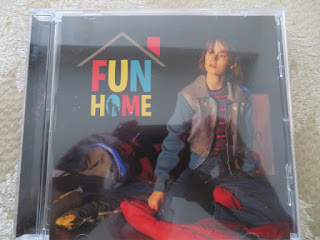 The soundtrack for the now Broadway musical “Fun Home” is on PSClassics (69 minutes).


The rather lilting music is by Jeanine Tesori and lyrics by Lisa Kron. The show started off-Broadway in 2013 and moved to Broadway in 2015 (Circle in the Square, I visited the old one in 1964 to see a Greek tragedy) and is now “off-West End” in London. The many awards include the Tony Award for Best Musical in 2015.


The Virginia Stage Company in Norfolk (Tidewater area) put on the musical this winter.  I didn’t get down to see it (I made two visits to the Southeast around it), but the performance was supported by QVirginia (note the handsome picture of downtown Richmond from the James River on the website home page; Norfolk is 90 miles to the SE).

The story concerns the coming of age of Alison, in two parts, as she comes out as lesbian after learning her dad was closeted as gay shortly before his death.

In the later part of the play she recalls her dad, and the questions as to whether one or more contacts might have been underage (track 17, “A Flair for the Dramatic”).

A couple of the more impressive songs include #9, “Party Dress”, and #14 “Raincoat of Love”, which has some nice counterpoint.

The chamber ensemble includes keyboards, Violin/Viola, cello, woodwinds, guitar, bass, drums and percussion. There is mention of Chopin but the piano passage work is more like Ravel. The story takes place in Pennsylvania and the CD gives a credit to Oberlin College (Ohio).