Composer Grant Hoechst: a variety of instruments and genres 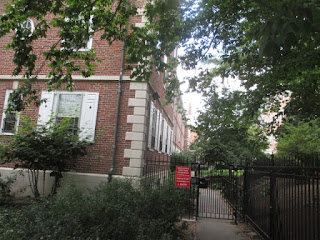 I wanted to note some additions to the website of composer Grant Hoechst (link given here March 29, 2015, now https, now a game designer for Naughty Dog in Los Angeles, formerly at Harvard.

There are three compositions with scores, two of them with MP3 files that are embedded and playable in the site.

There is an intermezzo for string quartet, 4+ minutes, called “Sparrows of Elysium”, performed by the Parker Quartet.  There are a lot of repeated notes, and a Vaughn Williams style modalism.  The music has no key signature but seems to be in the key of D.

There is a score for a trombone solo “By the Light of a Dusty Streetlamp”, almost evoking images of Charles Dickens’s England.

Then there is the three minute piece “A Swig of Moonlight” for bass clarinet and marimba, which is typical modern jazz.  The title reminds me of Reid Ewing’s “In the Moonlight, Do Me” from “Modern Family” (which compositionally is very interesting in its own right), although the style does not.

There is the 9-minute electroacoustic piece “SOS”, which sounds like the impressions someone might have during a bad NDE or real DE (if you still exist afterward, then there is an afterlife).  He offers a link to the WAV (the same as aiff on Sibelius) which requires log on to Dropbox.

The music in the two short films for which he wrote scores is not the same as these pieces.

I would think he would want to meet up with the Metropolis Ensemble in New York City.

For YouTube, I embedded Grant’s interpretation of Stravinsky’s setting of J.S. Bach’s “Canonical Variations” from his YouTube channel.