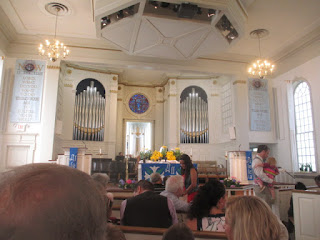 Better late than never, they say.  Easter Sunday service at Mount Olivet Methodist Church in Arlington VA (following community service Saturday, which I did not attend this time, and numerous sunrise services – I went to the Lincoln Memorial) featured a lesson in hymnology – several lesser known Easter hymns with some modernisms in harmonies.

The hymn “This Is the Feast of Victory” by Heilert and Charles Callahan, in D Major, has an interesting twist of harmony:  It goes to the relative B Minor, and then to F Major, which would be relative to D Minor, with an odd and fresh effect.

The performance above is at a new organ in Antioch Ill, at the Faith Lutheran Church on the “Rogers 361”.

I could use this effect in my own 1960 D Minor Sonata, maybe to further freshen the harmonies at the long progression that builds up three times (1st movement development, transition to finale, and again transition to big tune at the end, or maybe in the runaway train coda).

There was also Gweneth Walker’s “A Hymn of Resurrection”, with Brass (YouTube from Plano, TX, north of Dallas on 175).

Try “Lamb of God” from the “Mass of Creation” by Mary Haugen, here.

Then there is the “Festival Alleluia, Christ Is Risen” by James Chepponis (a favorite, it sounds like Vaughn Williams to me), performed in Columbia, SC. . 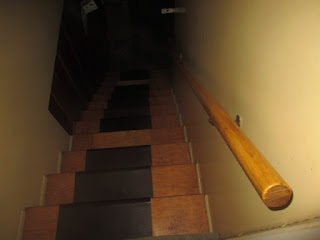 I covered a New York Philharmonic concert where Johnathan Biss plays Beethoven's Second Piano Concerto, whose cadenza inspires the "gulf" of Timo Andres's Third Piano Concerto, "The Blind Banister", on Wordpress, here.
Posted by Bill Boushka at 10:03 AM No comments: 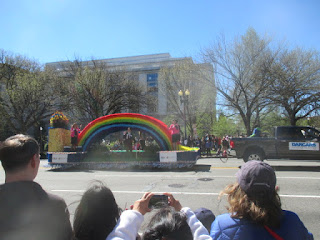 Having become interested in the completed Bruckner Ninth in recent years, I went back and took a look at the Furtwangler, whose Second Symphony I discussed here in February 2012.
But now the attention is on the Symhony #1 in B Minor.  Furtwangler conceived of the work in 1908 (one year before the Mahler Ninth, and six years before Germany started WWI)), when he was 22.

Now, Wilhelm Furtwangler is better known as a conductor to many people, and his actions during WWII created controversy given the Nazi regime, which Wikipedia pretty well summarizes.


In 1908, in fact, Furtwangler composed a symphonic movement called “Largo”, which he reworked as the first movement of the 1941 Symphony #1, composed as Nazi power was reaching its most ferocious, before America would be pulled into the War by Pearl Harbor.  In fact, the 31-minute first movement (one of the longest purely orchestra individual symphonic movements in literature) is a rather conventional but expansive sonata-allegro, and “Moderato” would have been a more appropriate marking. There are three theme groups, with the second and third themes spawning what sound like familiar melodies.  The last theme will gradually morph into the “big tune” in the finale.  The movement has an extended, quiet epilogue with some militaristic effects which anticipate Shostakovich.

The Scherzo, only 9 minutes, is even elfish, and will grow familiar quickly, in the home key of B Minor.

The Adagio, at 16 minutes, in G Major, has a noble four-note hymn-like motive that will sound familiar. One expects something that sounds like a great Bruckner Adagio, but the music is somewhat gentler and kinder.  The harmonic palette is about as close to Brahms as to Bruckner – again a curious mixture (as with Rheinberger).

But it is the 26-minute finale where Furtwangler’s compositional techniques really do seem influenced by Bruckner.  He weaves the motives from the first three movements (especially a 4-note fugal motif) to rebuild them into new themes.  Even the final “big tune” at the end seems to be constantly reinventing itself and modulating.  Furtwangler prepares a final pedal point in B Major in a manner resembling the wat Bruckner concludes his own Symphony #5 (in B-flat), and though here the final chorale theme keeps transforming itself into the final drumroll and tonic chords.


The performance above is by Gerd Alexander Albrecht and the Staatskapelle Weimar.  I have the CD advertised above from Amazon.

Would an Alan Gilbert at the New York Philharmonic look at this work and consider giving ti a performance?  It might be "politically" controversial, but the music is inspiring?

Posted by Bill Boushka at 9:27 AM No comments: 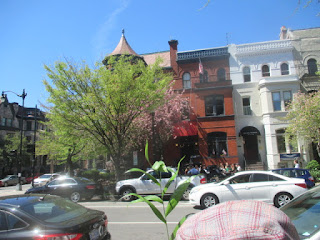 ON Palm Sunday, at the First Baptist Church of the City of Washington DC, Pastor Julie Pennington-Russell mentioned the composition “Quartet for the End of Time” (or “Quatour pour la fin du temps”) by Oliver Messiaen, for violin, cello, clarinet, and piano.


The composer began work on the piece (as a short trio) while imprisoned in a German concentration camp in 1940, at age 31. There was a violinist and cellist in the camp, and a clarinet player in transit. The 45-50 minute work would be performed outdoors in rain on Jan. 15, 1941.


The work comprises eight movements. Only four of the movements are for full quartet.  The concluding movement (“The Immortality of Jesus”) is a rather impressionistic meditation for violin and piano in E Major, that ends quietly; many of the other movements end loudly after extreme dynamic contrasts between pppp and ffff (even in the solo clarinet).  But much of the music has quasi-unison passages with 16th notes in slow tempo and melodic lines built around “modes of limited transposition”, that often sound serial and nearly atonal, even if they have impressionistic harmonies.  There could be some similarities to some of late Scriabin. The title of some movements refer to the acts and substance of angels. 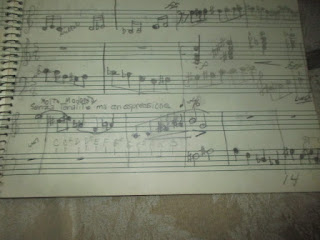 There is a little theme in my “Third Sonata” (1962) that one of the passages reminds me of.

Posted by Bill Boushka at 9:38 AM No comments:

Josef Rheinberger's Symphony #2 bridges Bruckner and Brahms, if you can imagine that 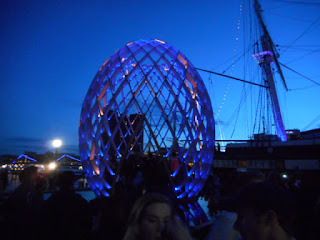 Josef Rheinberger, well known for choral and organ music, may be somewhat a bridge between Bruckner and Brahms.

The Symphony #2 in F Major, the “Florentine”, is a massive work (53 minutes), and seems to be fairly youthful.  The first movement and finale are a bit Mendelssohn-like – and let us remember that F Major is a key that seems to usually have a more pastoral personality (like the Beethoven #6, or even the Brahms Third).

But the 18-minute Adagio, in D Minor, is indeed monumental, anticipating Bruckner (especially the Fifth Symphony Adagio in the same key).  There is a second subject that sounds like a familiar church hymn tune, that raises to ecstatic climaxes twice.  The harmonic palette is closer to Brahms than Bruckner (Rheinberger hadn’t learned the value of unresolved dissonances yet), but Brahms’s slow movements tended to be simpler and more Andante-like.

The Third Movement is a Minuetto,in A Major,  rather than a scherzo, but is quite extensive – but again a little bit Brahmsian, and well worked out.

The Finale has a race to a jubilant finish that rather reminds me of Berwald, and perhaps Stanford (the Fourth Symphony, also in F).

Note the art work in the video, a vista on another planet, with a spindle city enclosed in a dome to provide a breathable atmosphere.

I have the OW CD with the Northwest German Radio Orchestra with Alun Frances.

Posted by Bill Boushka at 12:44 PM No comments: