Some Mendelssohn fugues -- going back to Bach 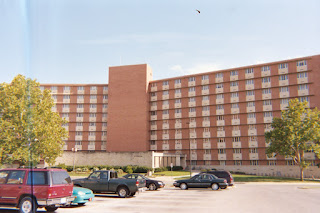 Last Sunday, Lon Schreiber, at First Baptist Church of the City of Washington DC played the second of the three Prelude-and-Fugue pieces from Op. 37 by Felix Mendelssohn, the Prelude and Fugue #2 in G Major.  I remarked afterward that it really does sound like Bach.  Screiber let it end fortissimo, but this YouTube performance ends it quietly.


I found that Op. 35 was the set of six Prelude-and-Fugue for Piano.

When I was a senior in high school, I was able to play #1, in E Minor.  The fugue breaks out into a heroic chorale in the Picardy E Major toward the end.  Serkin ends quietly, but I seem to remember bringing the volume back for the close.

When I was in graduate school in the mid 1960s at KU, my roommate had  a record player and one classical record, a Columbia of Biggs playing, among other things, the Bach G Major Prelude and Fugue, BWV 541..

Picture: McCollum Hall, on top Mt. Oread at KU, is where I lived 1966-67.  It has now been demolished, to be replaced by more modern housing.
Posted by Bill Boushka at 12:02 PM