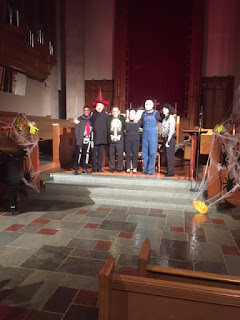 S’Oniece Dillard narrated as a parade or organists and a pianist performed.

Kevin Biggins started with the Introduction to the Suite Gothique by Leon Boellman.

Carol Feather Martin, from Trinity Presbyterian Church in Arlington VA, followed with the Roulade (Op/ 9 #3) by Seth Bingham, a rather playful work. 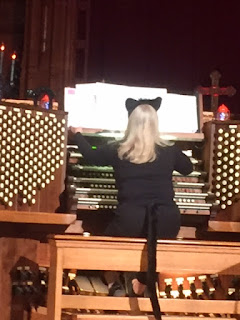 Martin followed by playing “Kitten on the Keys” on the Steinway piano, by Zez Confrey.  I think I heard a high school student play this a few years ago at Trinity. 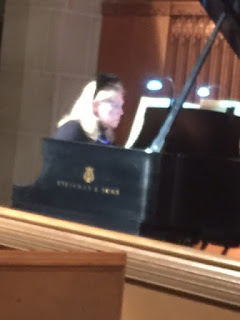 Ted Gustin followed with the Intrada by Grayston Ives, and a Toccata in D Minor buy Gordon Balch Nevin.

The heart of the concert was provided by ‘Jason” aka Irvin Peterson. He played his own Improvisation, which was hyperchromatic, venturing into  functional atonality with Scriabin-like mystique chords. The same “Black Mass” mood continued with “In a Medieval Monastery” by Walker Baylor, and with a reharmonization of the theme from “Jaws” by John Williams. (The Gay 90s in Minneapolis used to play the attack scene from this movie in the upstairs lounge above the disco.)   He concluded the section with the Funeral March from the Chopin Piano Sonata #2.  (He could have tried Beethoven’s Sonata 12 funeral march). 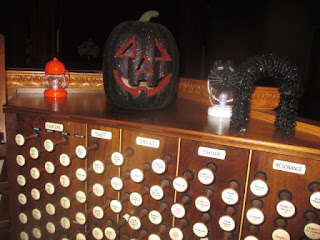 Lon Schreiber played a Trumpet Tune by Nicholas Bowden, and then the first movement (Prelude, “Allegro Maestoso e con fuoco”) from the Organ Sonata #3 in C Minor by Alexndre Guilmant.

Here’s a performance from Spain of the complete work . The second movement is an Adagio in A-flat, very reverent. The Finale is a broad fugue on a scalar theme and it does not go back to major.

The concert concluded with Rubrics V by San Loclair, performed by Kevin Biggins.

The organist who was to perform the notorious (in all horror movies as well as in Eugene Ormandy’s transcription) Toccata and Fugue in D Minor, BWV 565, of J. S. Bach, did not appear.  But here’s a good recording.  Note the conclusion, which stays in minor, practically gives us a tutorial on all the rules of western music harmony.

Posted by Bill Boushka at 10:05 AM No comments:

Local church presents baroque, and and special transcriptions, on a Baldwin grand while organ is rehabed 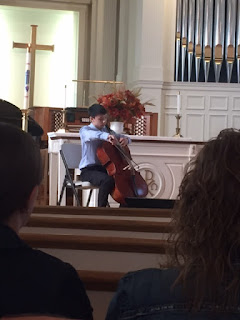 Today, Mt. Olivet Methodist Church in Arlington VA offered some interesting music at the 11 AM service, from a Baldwin Grand Piano while the organ is being rehabbed.

The Voluntary was “The Swan” from “Carnival of the Animals” by Camille Saint-Seans, played by cello and piano.   The video below is a little more substantial, the Cello Concerto, still on the light side.

There was an anthem with children’s choirs, soloists and piano “Lord, Listen to Your Children” by Ken Medema.

There was an offertory “O. My God, Bestow Thy Tender Mercy” by Giovanni Battista Pergolesi, a cappella.   I remember rehearsing the Ave Maria in tenth grade back in 1958.

The Postlude was Purcell’s Sinfonia in D Minor, transcribed to piano, performed by Steven K. Shaner.  I don’t think I’ve ever heard Purcell played on a modern piano before.

Here's a very chromatic hymn in B-flat by British composer Erik Routley "Let All the World in Every Corner Sing" (1960) that I noticed in the hymn book.  Very interesting modulations.

Posted by Bill Boushka at 7:27 PM No comments: 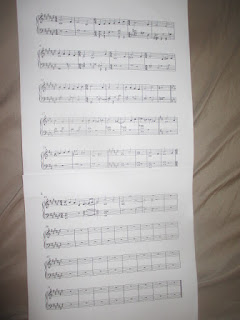 At James Pandolfi’s recent piano recital in Washington DC, I did buy his CD performance of the “James Bond Piano Concerto” by Simon Proctor, with the McLean Orchestra.

I was a little surprised when iTunes told me it could find only 22 minutes of music on this CD.  When I collected LP records in the 1950s and 1960s, trying to get over an hour on a record was a goal.  I had a Brahms Third with Wiengartner that ran 29 minutes by itself.

The piece itself is a medley of tunes from the many James Bond movies.  And instead of the more recent films in the franchise, I found myself reminded of the earlier films, which I saw in my somewhat troubled college days.  I remember particularly “Dr. No”, “From Russia with Love”, “Goldfinger” (most of all), “Thunderball”, and later, “For Your Eyes Only.”  Although I don’t recall hearing the “three blind mice” with which the very first film begins.

In the video above, pianst James Flemming plays a James Bond concert etude.  The beginning otive of a descending major third (the James Bond theme opening in all the motives) catches your ear, because that’s how Beethoven’s Waldstein Sonata ends, and how Sonata #31 begins. (It also occurs to start the second theme in my own Sonata). 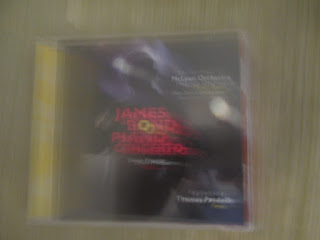 Posted by Bill Boushka at 12:20 PM No comments: 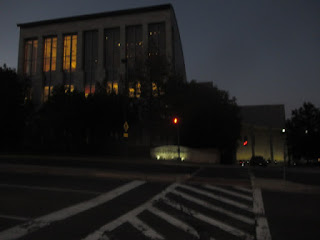 An elementary school teacher from Washington DC is heading to Botswana, in Africa, to study tribal and native music and help develop more curricula for grade school students, as reported by WJLA-7 today.

Needless to say, composers and university music departments will be interested in what she finds.  The familiar diatonic (and chromatic) music scale with its facile mathematical ratios is not necessarily apparent to all cultures.

This reddit discusses the issue of the “naturalness” of scales to the human ear.     Animal calls and bird songs don’t necessarily fit our scales.

However, there is a theory which explains why western harmonies (evolving out of Bach’s counterpoint and later Mozart, Beethoven, and German-European tradition) work so well – they have to do with strong and weak overtones (which are especially important on piano and some strings; not so much so in voice).  Does overtone theory explain why late Beethoven (quartets, sonatas) is so effective?

Posted by Bill Boushka at 9:45 PM No comments: 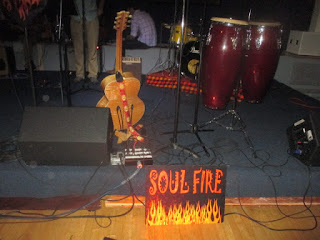 Late Saturday afternoon, October 8, 2016, Trinity Presbyterian Church in Arlington held a rock concert by the group SoulFire, to raise funds for the church’s participation (along with another church in McLean) on assisting a future immigrant refugee family, under the supervision of Lutheran Social Services which works directly with DHS and the Department of State.

The concert featured popular disco music from the 1970s and 1980s, especially “China Grove”, “The USSR” and “Hey Me, What Do You Want to Do?”


The concert was moved indoors to a gymnasium due to the outermost bands of Hurricane Matthew.  An Indonesian food truck was available. 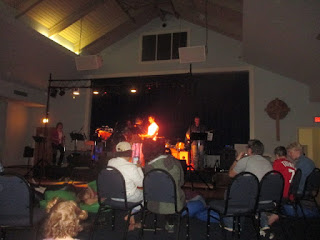 Posted by Bill Boushka at 8:24 PM No comments: 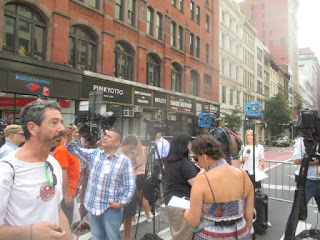 Let me recommend playing with the score visible, the Piano Concerto #3 in D Minor, Op. 30, by Sergei Rachmaninoff.   The work was composed in 1909, the same year as Mahler's Ninth Symphony, and likewise represents a culmination of post-romanticism going modern.

The performance is by Alexis Weisenberg on RCA Victor back in 1968, with the Chicago Symphony under George Pretre.

A high point of the work is the cadenza at the end of the Development section of the first movement.  Weissenberg plays the version that starts “leggiero”, and builds up to the famous chordal climax.  I think this is really the more difficult of the two.  But I grew up with the Ossia, played by Van Cliburn with Konrashin in 1957 on RCA. .

The piano concerto, besides one of the most technically difficult in the literature, is remarkable in the way Rachmaninoff interrelates the themes from the three movements, finally justifying the “big tune” in D Major at the end, which has evolved from everything that came before. The opening starts with a very simple melody in common time that gradually gets more elaborate.  Very quickly the theme comes to a pianistic climax on the dominant A Major, which could run the risk of sounding trite. The concerto constantly uses Rachmaninoff’s personally colored harmonies, layered on top of what sounds like folk song.  The heavy use of accidentals and passing tones and progressive half-step modulations overlays what could otherwise be a hackneyed and obvious tonal scheme.  The “Ossia” cadenza comes to another big climax on the dominant before its pronouncement in the original d minor.

The slow movement is said to start in F# Minor, but the music actually languishes in D minor and seems to be transitioning to the dominant A Major (relative to the first movement) before an extensive middle section in D-flat Major, resembling one of Rachmaninoff’s late preludes.

The Finale, Alla Breve, starts with a natural interplay between d minor, dominant a minor, than then secondarily relative C Major and minor.  The famous “scherzando” middle section in E-flat has its own “middle of the middle” in E with a “prelude-like” slow section, based on previous materials, anticipating the big tune at the end.

When I watch the score I marvel at how Rachmaninoff (or any great composer) wrote down such a masterpiece entirely by hand.  I wrote out my second Sonata by hand in my junior year in high school on a kitchen table on snow days – I’ve come back to this again soon on Wordpress.  Given the pressure of today’s young composers to make a living on commissions and be clever, I wonder if any composers have the time to come up with a postromantic masterpiece on the scale of the Rachmaninoff Third.  Yes, they can be clever.  Have they lost interest in the tradition of romantic music turning modern, and blowing itself up with its grand scales?  Or is it, even with modern software tools like Avid Sibelius, becoming an impossibility to pull off?

The Concerto gets a lot of attention in the 1996 film "Shine" and then the biography "Hello, I am David", both about pianist David Helfgott. 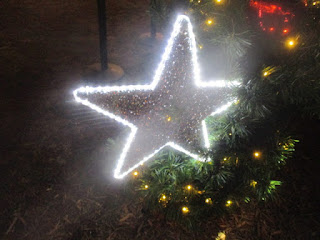 Here's some sheet music for the Ossia cadenza, starting at 10:00.  Note the Rachmaninoff "gets away" with some repeating harmonies in a 3+1 pattern, or sometimes 2+2.   Here's a source on which cadenza pianists perfer.

Posted by Bill Boushka at 10:50 AM No comments: