Spirited organ variations on "Immortal, Invisble", a spiritual, and Beethoven's idea of reunion 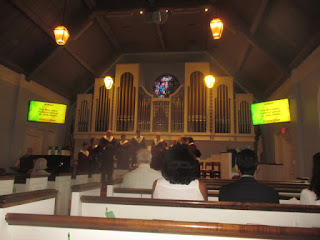 Sunday, September 25, 2016, Trinity Presbyterian in Arlington offered a mix of most interesting music and items.

Organist Carol Feather Martin performed the Introduction Variations 1, 2, 3, and 10 on St. Denio by Hans Hielscher.  I wish she had simply played the entire work as a prelude (probably about 25 minutes).  The hymn is “Immortal. Invisible”, and the style reminds me of British composer Havegal Brian (although the composer is German).  The last variation ends with a tremendous C Major climax. But the work reminds me of a few comparable works that use hymns:  the last movement of Brian’s Symphony $3 in C# Minor (which also uses “Nearer My God to Thee” and works up to a tremendous climax on the Beethoven Fifth (and Mahler Fifth) four-note motto surrounding the hymns.  The second movement is rather like Vaughn Williams and the third movement is a pure Mahler scherzo, and the first movement is a set of variations with a piano obligato (like Bernstein’s “Age of Anxiety”).  I’m reminded of the tremendous orchestral epilogue for the 1944 film “A Canterbury Tale”, with materials built from “Onward Christian Soldiers

and “Immortal, Invisible”, and again, the Beethoven 4-note motto.  Then there is the way Sir Arnold Bax mixes this material with “The Old Rugged Cross” to conclude his Fifth Symphony (also C# Minor) triumphantly, but very British.  And the “Immortal” theme occurs in the big tune that concludes Ernst Von Dohanyi’s first Piano Concerto (E Minor), no doubt an inspiration to Rachmaninoff. 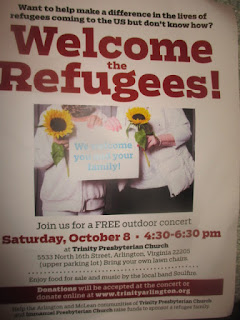 Rev. Judith Fulp-Eickstaedt gave a sermon “Letters to a Young Disciple: About Money”.  This time, she asked for comments from the congregation (which been a practice at the nearby Clarendon Presbyterian Church under David Ensign).  Two people, including me, mentioned childlessness and not having dependents.  Financial security sets up a moral paradox:  one can afford to “refuse” unwanted intimacy from others based on any arbitrary conditions in the person’s mind.  When this gets too acceptable for the whole herd, well, someone like a candidate whose name was not mentioned can become a presidential candidate and get a lot of traction, and threaten to bring back fascism to replace the moral paradoxes of freedom.


I’ll close this post with Barenboim’s playing the third movement “The Return” from Beethoven’s 26th Piano Sonata, “Les Adieux” (the Goodbyes).  It’s a riddle, not too hard to solve by the sentient, especially fans of the early years of "Smallville".  .