NSO does interesting Brahms, Dvorak before the big DC blizzard 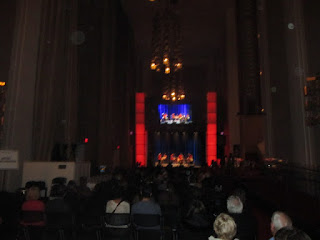 The National Symphony Orchestra tonight presented a curious concert, and given the approaching blizzard, one wonders if the Friday and Saturday concerts can be held.

The concert opened with Christoph Eschenbach conducting “Phaeton”, by Christopher Rouse (b. 1949, Baltimore), composed in Indianapolis in 1986.  The piece is very dissonant, deliberately so, way beyond the schmaltzy music of Schoenberg and Berg that I have gotten used to.

It continued with soloist Daniel Muller-Schott performing the Cello Concerto in B Minor, Op. 104, by Antonin Dvorak  The work is in Dvorak’s mature late style, which is more idiomatic than his earlier works (which are quite interesting, especially the first two symphonies, which are a curious brew of Brahms and Bruckner, if one can imagine such an admixture).  Eschenbach took the second theme of the first movement at quite a leisurely pace, and drew out the quite epilogue in the finale, just before the rush at the end.

But after the intermission, the main event was Arnold Schoenberg’s orchestration of the Piano Quartet #1 in G Minor by Johannes Brahms (Op. 25).  Does this give us a Brahms “Symphony 0”?   Would it fit with the “big four”?  The orchestration is a little more intimate and “modern” than Brahms would have used, and frankly I missed the piano, especially in the “Hungarian Rondo” last movement.  Schonberg calls the C-minor second movement am “Intermezzo” rather than a scherzo, and the slow movement (in E-flat) emphasized the march-like middle section, sounding like the mood in Germany in the 1930s just before Hitler.  The work does not go into the Picardy major at the end, but rushes to a prestissimo conclusion in minor.  The last movement was used in the 1986 film “Parting Glances” by Bill Sherwood.

Posted by Bill Boushka at 8:58 PM No comments:

"Sounds of Defiance": Violinist Yevgeny Kutik performs works of defiant ex-Soviet composers; note on a recent recital that I missed 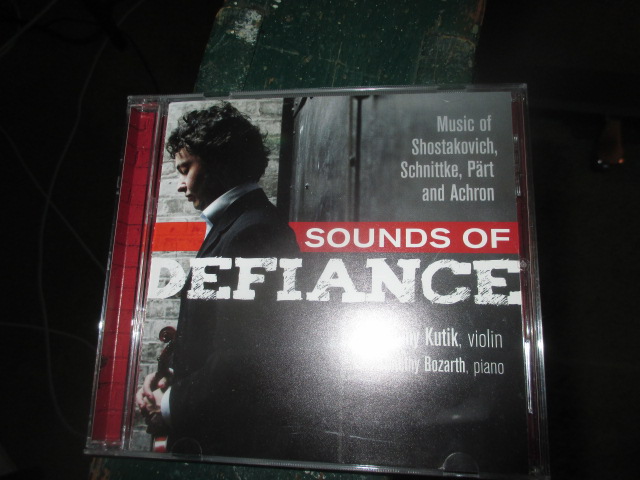 I bought the 2012 CD “Sounds of Defiance” (through Amazon), from Marquis, a 4-composition recital by violinist Yevgeny Kutik  and pianist Timothy Bozarth.  This purchase was a bit if a Plan B, but I’ll come back to that.

Kutik’s album notes that he emigrated with his family from Belarus to the US around 1990, about age 5, shortly before the collapse of the Soviet Union.  This was a time when special provisions were made for Jewish immigrants from the USSR.

The four works represent four composers whose artistic freedom was seriously challenged by the political agenda of the Soviet Union.  Some good reading is the essay “The Forgotten Avant Garde: Soviet Composers Crushed by Stalin” by Andre J. Horton.

The biggest work is the Violin Sonata #1 in G, Op. 134, composed in 1968 by Dmitri Shostakovich.  Both his violin sonatas were composed late in life.  Running about 32 minutes, it comprises three movements.  The work is said to be inspired by a similar work of Prokofiev. The opening is an Andante, that has a twelve tone theme in a tonal setting.  The scherzo (Allegretto) is persistent and memorable, and somewhat conforms to the style of many of the composer’s later works. The finale is another slow movement, a 15-minute passacaglia, which ends quietly on the note A, but rings some warning bells toward the end.

The other major work is the Violin Sonata #1 by Alfred Schnittke (1963), running about 18 minutes in four brief movements.  The opening Andante seems to start with a twelve-tone row, but the music tends to become increasing tonal as it progresses.  The concluding movement is an “Allegro scherzando”, which Rachmaninoff had used in his Second Piano Concerto, but here the music winds down to a quiet, sweet ending. The idea of alternating tonality with atonality doesn’t get discussed by critics as often as it really happens.

But the pleasant surprise is the simple “Spiegel im Spiegel”  (“Mirror in the Mirror”, 1978) by Estonian composer Arvo Part. This famous (rather “hidden in plain sight”)  little piece is often played in the movies without proper attribution. The piece, in F Major, has a simple repeated three-note motive “C-F-A” over simple shifting harmonies suggestive of Bach.

I had wanted to attend the recital at the Phillips Collection in Washington DC Sunday, January 17, 2016, where Kutik performed with pianist Timo Andres.  I looked at the Phillips website on Sunday, January 10, and the concert was already sold out, one whole week ahead.  And Phillips does not keep some seats at the door for the last minute, as do some venues (I checked).  One reason for the sellout could have been the 75th Anniversary of the facility.  The program included two works by Igor Stravinsky, and a work by Nico Muhly, as well as Andres’s new “song without words” called “Words Fail”.  (The weekend turned out to be as busy for me as a venture to NYC could have been anyway.)

Laurie Niles explains how commissioning a new work from a composer works in this story on “Violinist”   where Niles interviews Kutik about the whole process of working with a composer (and vice versa).  This might have been my life had I been born a few decades later.  We don’t get to make those choices. 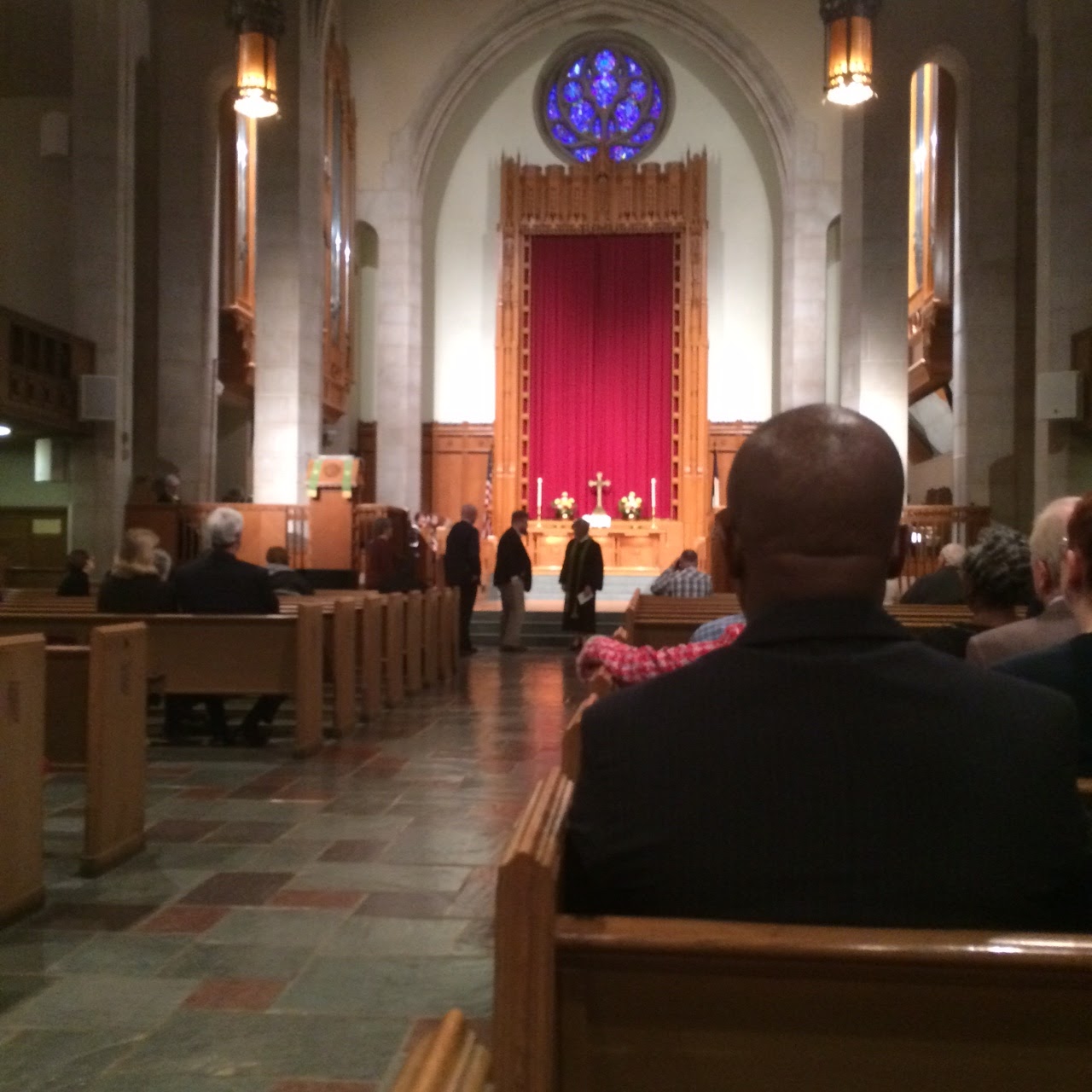 Sunday morning, at the opening service at First Baptist Church of the City of Washington DC for pastor Julie Pennington-Russell, a short choral work by organist-choirmaster Lawrence P. Schreiber “The Prince Family Amen” was performed.

Posted by Bill Boushka at 3:55 PM No comments: 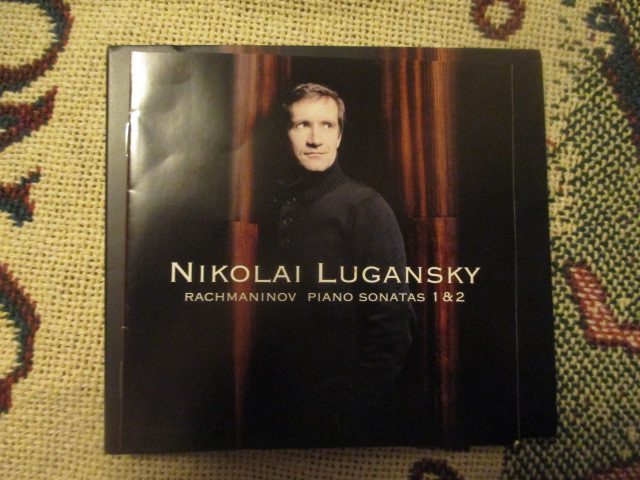 I picked up a CD of the two piano sonatas of Sergei Rachmaninoff, played by Nikolai Lugansky, on the Amrboisie (Ambrosia) label from France.

The Piano Sonata #1 in D Minor, Op. 28 (1908, 35 min) seems close in style to the Op. 32 preludes, and a little closer to the Piano Concerto #3 in the same key than to the more popular Second.
But Rachmaninoff wrote the music to be somewhat programmatic, after the example set by Liszt’s “A Faust Symphony”.  The outer movements make a lot of use of intervals of fourths and some allusions to the “Dies Irae”.  Still, the overall texture anticipates the nuances of the Third Concerto. The movements are marked “Allegro Moderato”, “Lento” and “Allegro Molto”.  The first movement slows down and ends peacefully in D Major.  The slow movement is in the relative F Major, not common for the composer. The Finale is the longest movement and seems to pick up on the first movement.  Toward the end, it seems to wind down as if to end peacefully, before a particularly violent outburst at the very end, staying in D Minor.  I wanted the last chord to be Major.

The Piano Sonata #2 in B-flat Minor (1913, rev. 1931), Op. 36, is shorter (24 minutes), and better known and somewhat popular, even though the harmonic style is a bit more remote, like the Fourth Concerto.     It has two basic versions.  Most pianists (like this one) prefer the original version without the cuts, although some take a few of the changes in the revision. Rachmaninoff even said he was inspired by the famous Chopin Sonata in the same key, as well as Tchaikovsky’s famous piano concerto.  The first movement (Allegro Agitato) is perhaps a bit like Chopin on steroids, but the movement winds down to a quiet ending in minor, with a curious reference to a motive from Scriabin’s “Black Mass”, composed about the same time.  The slow movement, in G, is marked “Non allegro; Lento” and shows some of the harmonic subtleties of the composer’s later music, although it’s always tonal. (I think Rachmaninoff was a bit interested in what Scriabin had done, but would not carry the experiments as far.  I also think he got some inspiration on how to build “big tune” closing climaxes out of seemingly frivolous material from the little played first Piano Concerto of Eugen d’Albert, a youthful work which may have been better known in the past than it is now). The Finale is a tour de force, ending in total triumph with virtuosity in B-flat Major, with a rush to the very end; it’s a crowd pleaser in real concerts.

Posted by Bill Boushka at 8:54 PM No comments: 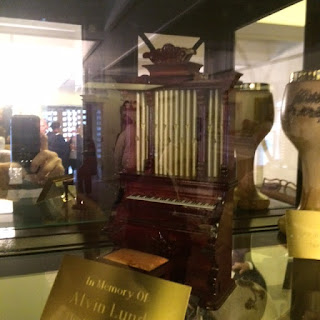 
The kids show tremendous enthusiasm, and I have rarely seen a math teacher connect to students this way.  I worked as a substitute teacher myself from 2004-2007 (see especially Oct. 17, 2008).

The “work” or song that the kids composed does sound a bit like hip-hop.

See a story on the Issues blog about "art integration" (theater and dance) with math education in Virginia.

Posted by Bill Boushka at 11:00 AM No comments: 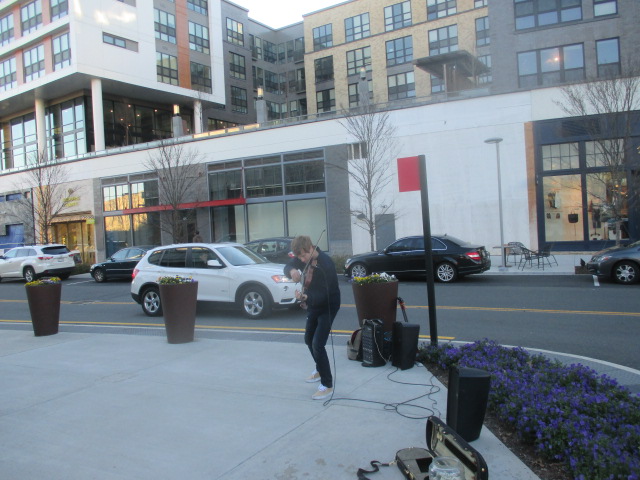 Today, I encountered an unannounced so violin concert (with synthesizer) outside the Angelika Mosaic theater in Merrifield, VA (Fairfax County, 18 miles to DC).  This was a bit more professional than what I see around NYC subways or, less frequently, the DC Metro.

The young violinist performed what an audience member told me is a song by Taylor Swift, and then some music from the movie “Titanic” by James Horner.  To my music memory, the supposed Swift excerpt reminds me of “Blank Space”. On a solo violin, the effect is more noble, something that sounds like it belongs in another “Titanic”, with the “real people” dancing to it on the lower deck.

The weather was sunny with a temperature in the mid 40s and no wind, mild but not nearly as unseasonably warm as recently.

I could not identify the violinist, but he reminded me of Tim Fain (Nov. 9 in New York City at Le Poisson Rouge).

Posted by Bill Boushka at 5:23 PM No comments: