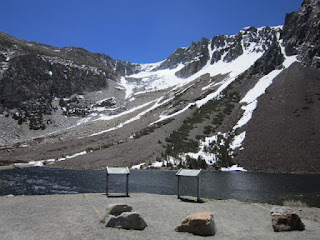 The play “Bruckner’s Last Finale”, by Dick Reichman, depicts the issues around the composer Anton Bruckner’s work, was performed early in Alaska in 2012.  There’s an early audio review here , and a notation here,

The entire play can be viewed on YouTube. Peter Porco plays Bruckner.  (2016/10: Video was removed by user.)

The stage play, shot in black and white, supposedly on a stage at the St. Florian in Linz, Austria, comprises a lot of short skits, not in sequence, showing major turning points in Bruckner’s life. At the beginning, he is 67 years old, has sea legs balding and filled with fluid from heart disease and probably diabetes.  Yet, he is self-confident to come on to young women. (Although he wants them to follow his rules and convert back to Catholicism.)  He likes to count things, like someone with Asperger’s.
Various other personalities, like Hugo Wolf and Richard Wagner appear.  Wagner and Bruckner have an interesting exchange about Bruckner’s using some Wagner motives in the Third Symphony (or Dominion).
When working as a church organist, he asks another musician to teach him composition (already age 40) because he has a commission.
At one point, Bruckner says that all music already exists and is copied from God.  As for the Finale of the Ninth, he’s just the editor. “People don’t usually finish things…. You’re done.”  We find out the young female managing his commission really is an angel.

"They're giving my notes away."

But at another time, he admits he is a “bad composer”.  That is, “it takes a long time to become a good composer.”  For a "good composer", his work lives forever, even if not all written down.

Toward the end, various people after his death comment on the politicization of music, as Nazism approaches. “You have to take sides to keep your job.”
At the end, Bruckner deals with his difficulties in finishing the Finale for Symphony #9, the most colossal orchestral finale of all time.  (Or, “the greatest of all time.”)  He would work on revising earlier works (especially #1), sort of like my blogging when I should be finishing my own Sonata (and it’s my own Finale that causes so much trouble.)

The play concludes with the closing pages of the 2008 Samale-reconstruction of the coda of the Finale for Number 9 (but Samale has simplified it in a 2012 version).
You really can’t “fire” composers, can you?

Posted by Bill Boushka at 8:07 PM No comments:

Will auteurs want to own their own music collections? Also, more on the Bruckner 9th Finale, and Belgian composer Letocart Indeed, I’ve gotten lazy. It’s usually easier to play a symphony on YouTube (since the sound on my desktop is pretty good) than get out a CD.  Sometimes a YouTube video gets taken down for copyright.

In fact, I usually buy CD’s or MPG’s from Amazon only for composers or artists I personally want to support, or sometimes for a rarely played work that is likely not to remain free online.

And as I’ve noted before, my father used to say “You’re married to your records”.  And one of my unpublished songs (from a sketched choral symphony) has the text line “collections held me”. Mystics look at collections as attachments. Yet, as Tim Lee writes (another "Timo", this time in his mid 30s), "buying music is for old people" (like me).
I used to have catalogue entries for my records on a database (Access) somehow lost among household moves years ago.
MPG’s (with accompanying PDF’s for program notes) could be a reasonable way to collect music “instances” (as a digital library) in the future.  If you do a household move, you don’t have to physically carry around (or pay a mover) what’s in a digital cloud.  The security problems change from burglary or natural disasters (storms) to possible packers or maybe power grid failures.
I’ve rooted around a little more on the finale of Bruckner’s Ninth.

Benjamin Gunnar Cohrs has written a long paper on the reconstruction efforts by Samale, Cohrs, Phillips and Mazucca  (PDF on a scholarly site devoted to Anton Bruckner's music) on the Finale, and offered a new reconstruction, as of 2012, which essentially replaces the final coda and pedal point relative to the 2008 version (and 1992 and 1987 versions.  Instead of bringing back the full ascending chorale of the Bruckner Seventh, now Samale et al concentrate on the “Hallelujiah” morif from the Trio of the Scherzo and the brass theme from the slow movement, all of this related to the descending motive that opens the Beethoven Ninth and Bruckner’s own Third.   The resulting coda is slightly shorter and, in a way, a bit brutal. There is a "resolution point" to final D Major, with the descending fifths, then a "Ring" pianissimo exploding into the final crescendo with rising fifths, with just a hint of the theme from the 7th.  Instead of a single concluding D Major fortissimo chord, there are four of them, crashing down.

I find the 2008 version moving, however.  I’ve notice in the materials in my Sonata some subconscious (dating back to 1962, although I had gotten Walter’s performance of the 3-movement Ninth on Columbia  in 1961) connection to the motives of the Bruckner 9th, and I’m trying to put the Finale back together, building up through these motives to a massive outburst at the end, as the music goes from being playful to menacing and finally monumental at the conclusion.  The rising theme of the Seventh seems so effective.

Then there is the completion by Belgian composer Sebastien Letocart, who also makes a lot of the Hallelujah motive, for which there is a curious accompanying “bisexual” short film (here. May 25) that combines religion, conventional heterosexual love, discipleship, and homoerotic ritualism to accompany the coda. Now, I’m impressed with the notion that Letocart has varied more from the original (even though he quotes several other Bruckner symphonies), and composed his own fantasy, which is actually very moving and effective (remaining in minor until almost the very end) the way Hans Zimmer’s music for “Inception” is so moving. There is a bit of Hollywood in this version.  But this seems to be the music of Letocart, a major composer in his own right.  For example, here is his organ Prelude and Fugue in G Major (10 min) on YouTube.  Note the thick, somewhat French texture and  sound, almost like Scriabin at times.

Letocart temperamentally reminds me of a fellow much younger (age 29) Belgian (and sometimes LA-based), singer-actor and likely (soon) film producer Timo Descamps, who has recently sung a lead role in a chamber opera based on the French Canadian play (Michel Marc Bouchard) and film “Liles” . We’re hoping that production comes to the U.S.

Does someone know where a performance of the complete Bruckner Ninth, in any major version (Samale 2008 or 2012 or Letocart) will occur?  I would think the New York Philharmonic or Washington National Symphony or maybe Los Angeles Philharmonic would take it up now.

It's also important the the first three movements have some version differences.  There are three possible trios to the scherzo (one of them in F major, the other two in F#) and the Hallelujah theme seems to come from the second (the most often used, as in the 1961 Walter recording for Columbia).
Picture: Pride Party in DC last weekend, the illuminated “crown of thorns” got my attention, would have fit into Letocart’s film.

Posted by Bill Boushka at 9:45 AM No comments:

"The Three Sisters" by Anton Chekhov, BBC version from 1970 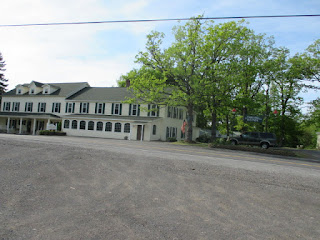 Netflix offers a DVD of the 1970 BBC performance of “The Three Sisters” by Anton Chehkov, directed by Cedric Messina.  This was from the BBC Play of the Month, Season 5, Episode 4.
Olga (Eileen Atkins), Masha (Janet Suzman), and Irina (Michele Dotrice) have been compelled to leave Moscow for the countryside, and share their father’s home with brother Andrei (Anthony Hopkins). Andrei’s marriage to a questionable woman seem to dash their hopes for a better life.
The play contains a lot of references to the expectation of war and coming revolution, which I did not think was that well recognized in 1900.
The play has a lot of “inevitable epigrams” about individual purpose. One of the best is “There isn’t going to be any happiness in our generation. All the happiness is reserved for your descendants.”

There is another scene where one of the sisters is told she should consider marrying an older man, and that it is wrong to marry for love or looks (or, in a modern sense, base a relationship on "sexual attractiveness -- I recall those therapeutic discussions in NYC from the 1970s).  In their culture, you needed to "have" a marriage, which made many moral questions two-way streets.

There are references to “low ideals”.  Andrei later says, if he had life to live over, he wouldn’t marry. After tragedy, the sisters sit on the porch, with a sunset behind them, and say they just go on living.
The (London) stagecraft, of the home and its interiors, is quite elaborate.
The music is simple, with some piano music of Tchaikovsky played occasionally. Note: the title of the play is often listed without a definite article ("Three Sisters").  Watch the spelling of the playwright's name, it has an extra "h".  The author was also a physician, but he died of tuberculosis at 44 in 1904.
The version runs 130 minutes, not as long as some others.

Posted by Bill Boushka at 8:39 PM No comments: 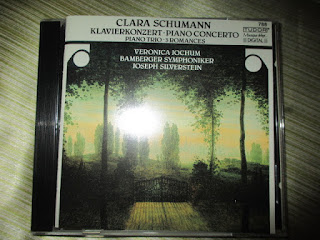 I’ve talked about Robert Schumann’s “Dances of David” here (April 1, and April 26), as somewhat related to Robert’s marital relationship with Clara, so I pulled out a Tudor CD of Clara Schumann’s music, from 1992, with Veronica Jochum, piano and Joseph Silverstein, Violin, Colin Carr, cello, and Silverstein conducting the Bamberg Symphony (I think the same orchestra on a lot old Vox recordings).

The Piano Concerto in A Minor, Op. 7, 1833, was orchestrated by Robert (the marriage occurred in 1840).  Originally only the Rondo Finale was performed.  The first movement, Allegro Maestoso, sounds like an exposition, and is somewhat monothematic, declarative and perfunctory. It concludes on the Dominant E Major, before the Romance starts (briefly) leading to the lively Finale, which sounds more mature and better resembles some of the writing in Robert’s own concerto  -- except that this "main movement" stays in A Minor to the very end (Robert's finale is in the Picardy Major). This is Clara’s only “orchestral” work.
The Piano Trio in G Minor (Op, 17, about 1840, 27 minutes), seems more mature.  The second movement is a minuet, but fits well into early romantic style anyway.  The conclusion is virtuosic and somewhat light-hearted (Allegretto) but switches to major only at the very end.

YouTube shows many shorter piano works, and a Piano Sonata in G Mnor.

The Blogger link for the video above ;s "Melhoresmusicasclassicas".
The CD also includes three Romances for Violin and Piano (Op. 22), each about three minutes.
Posted by Bill Boushka at 9:46 AM No comments: