Greenberg's model railroad show in VA is smaller than WGH 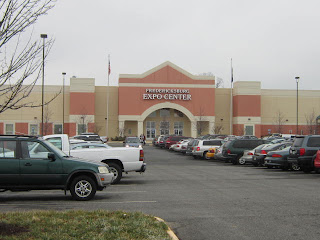 I visited the Geenberg’s Train and Toy show in Fredericksburg, VA today (link). 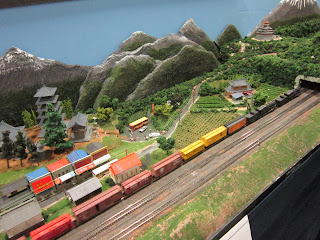 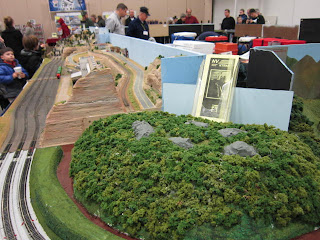 The Greensberg show is smaller than WGH, and they layouts were not as adventurous.  The most interesting concept probably belonged to the Northern Virginia NTrak, which invites model clubs that follow their standards to build their own little villages onto the bigger layout. The result is that the model trains travel through a variety of “dominions”.  Today, for example, one section was a model of the countryside around a temple in Japan. Many of the other sections, though, were the typical small town America. 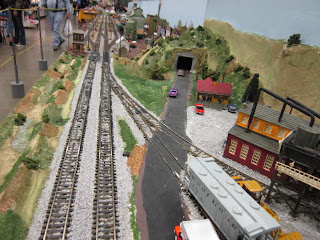 One idea would be to set up the sections as slices of the same community in various time periods of history, with the train running through a model of space-time (in a trigonometric form around a circular layout).  An alien civilization could set up a planet this way (with an annular civilization on a planet caught in tidal lock), and place people in a time-slice appropriate for the person.  Only the devices appropriate for the period could work in a particular section.  Music more advanced than possible at a particular time could not make sounds.  Abducted people living in the model railroad could graduate from one time pie-slice to the next by mastering the skills (including people skills) of earlier times.  Anyone want to try this as a concept for an indie sci-fi film?  Maybe even an arena stage play.

Another group represented historical interests in the Washington and Old Dominion Railroad, a freight-only short line that ran from Alexandria to the foot of the Blue Ridge Mountains in the 1950s, now replaced largely by a bicycle trail.
Here's some "drag racing" with model locomotives: 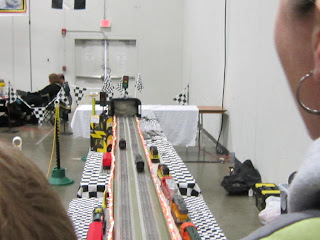