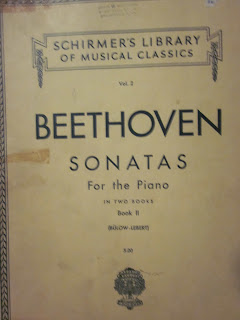 The New York Times, on Tuesday Feb. 22, carried an interesting front page story about published classical music and copyright. This story could be studied in conjunction with many issues in copyright law discussed on my main “Bill Boushka” blog, sometimes involving mass litigation (including the RIAA cases).


The story, by Daniel J. Wakin, is “Free trove of music scores on web hits sensitive copyright note”, link here.
The entity of interest is the Internet Music Score Library Project, at this (url) link,  a kind of Wikipedia for sheet music (but there is also “Pianopedia”).  I quickly navigated the a 1+ meg PDF file of the score of the last movement (Adagio) of the Mahler Ninth. Yes, I was rather captivated by all the double flats and other accidentals in a D-flat major score.  It’s rather interesting to look at music your ear knows to see what it would look like if you played it (by sightreading) on a piano. The site provides a disclaimer (which you must click) that it makes no warranty that the file is copyright permitted.
The New York Times gives the legal history of the site, which was down for a while after a cease and desist from Universal Edition in Europe, because it was impossible to determine where the individual infringements lived on the site. But eventually volunteers checked the entire site.
The traditional business model of classical music publishing is partly based on research to provide more definitive editions of established masterpieces which might otherwise simply be public domain. For example, Leonard Bernstein did a lot of research into the orchestration of Robert Schumann.  Many researchers have restored “almost completed” works of Schubert, Mahler (the Tenth Symphony), and Puccini, to name a few.


Music publishers say that revenue from indirect royalties based on research into previous-era composers helps support commissions for new composers. (Young composers need this support supposedly because "It takes a long time to become a good composer.")  Yet some young composers allow their music to be made available under Creative Commons licenses. The business model for classical music must change; it’s rather silly to count on royal weddings to justify big commissions for new works.  (I think Prince William and Lady Kate would do well to use some Schumann, anyway.)   Film might become a better source of revenue if directors were more conscientious: closing credits could be a good place for new concert overtures (like in “Inception”, Hans Zimmer) rather than rambling medleys.
Cottage technology affects music publishing in other ways, as personal computing makes the composition process (hooked to electronic instruments) much more efficient – particularly in the MacIntosh environment with products like Logic and the use of the new iPad.
Posted by Bill Boushka at 6:21 PM No comments: 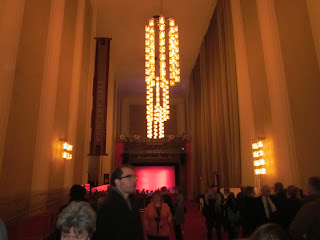 Tonight, I attended a National Symphony Orchestra concert for the first time, well, in a while. Back in 2003 I had sold season tickets for the NSO.

Gianandrea  Noseda was making his debut with the NSO this week, and Radu Lapu, looking like a grizzled Brahms, was the pianist.

The program opened with Bedrich Smentana’s Overture to “The Kiss”, a folk opera with rather obvious nationalism, and mannerisms that reminded me of “The Moldau” from high school days. Another bit of similar music occurs in Smentana’s “Festive Symphony”. 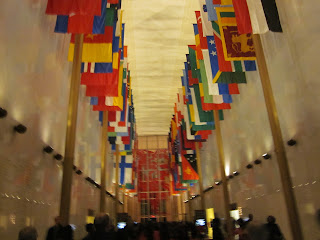 Next up, they rearranged the stage for Beethoven’s Piano Concerto #3 in C Minor, Op. 37.  I got to know this work from a budget recording in 1959, during my junior year in high school. I “read” it as a senior with my piano lessons.

It struck me how different this work is from the Fifth Symphony, or from Mozart’s 24th Piano Concerto in the same key (which I think is more interesting). This work has always seemed slow paced and dogmatic. Yet, it has its wonderful moments. The most interesting feat of musical technology may be the enharmonic relationship between the G# of the E major slow movement – the most romantic and original part of the work – and the A-flat, which often fits into the diminished seventh chords in the first movement, and then launches the Rondo finale.  (The original first movement cadenza is massive, and amounts to a second development section.) The work ends in C Major, but there’s no big tune here; it stays workmanlike.  Mozart stayed in minor in his C minor concerto, but in the D minor, #20, remember, he provided a wonderful D Major conclusion, anticipating the romantics years later. 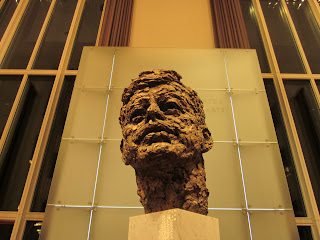 After the brief intermission (and some Facebook experiments on another patron’s cell  luminous iPhone after an informal discussion about how Facebook had done more to change the Middle East than all of Bush’s wars or “decision points”), we enjoyed the treat and point of the evening, Tchaikovksy’s Manfred “Symphony”, Op 58.   I guess Tchaikovsky could have numbered it Symphony #5.  It is in four movements and more or less follows typical sonata and rondo forms, but the same motives reappear as in a fantasy or tone poem. But what’s really striking is these rising scalar gestures, constant scolds (based on the story of Manfred and Byron’s poem which readers can look up), which sometimes turn into themes, or a fugue (as in the finale), but most of all at the (B Minor) climax of the first movement, which hits the listener like a smackdown. It may be the most violent in all of Tchaikovsky’s music, even outdoing the end of the first movement of the Fourth, and the early Francesca.  The audience gasped at this moment. The work as a whole, however, ends serenely, after the organ (which means the backstage seating at Kennedy can’t be used) passage gives us Manfred’s view of the afterlife, or perhaps an “inception”.  I believe I’ve heard a bit of Manfred in the early years of the Smallville series, as if Clark Kent were like Manfred, wrestling with his identity.

The work would attract an audience now because of the impact of Fox’s “Black Swan” film from director Aronofsky; some of Swan Lake, which is a much earlier work, has a similar impact.  But Manfred takes things further, in a few places taking progressive chromaticism almost into atonality, unusual in Tchaikovsky.

The entire work takes about an hour (long for a "tone poem") but some recordings of it in the 50s and 60s took cuts, partly to fit onto one record.

Posted by Bill Boushka at 9:30 PM No comments:

"Sunset Boulevard": Andrew Lloyd Weber's musical on the famous 1950 film is at the Signature Theater in Arlington VA 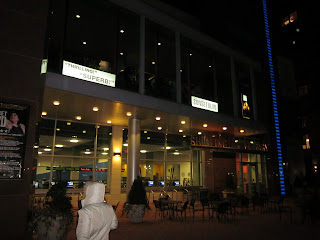 The Signature Theater in Shirlington in Arlington VA has been running (through Feb. 13) a lavish stage production of Andrew Lloyd Weber’s musical “Sunset Boulevard.”  The book and lyrics are by Don Black and Christopher Hampton.  The site for the production is (website url) here. The Broadway musical had premiered in 1994. 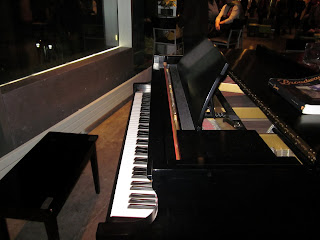 The story comes from the famous, garish black-and-white Paramount 1950 film directed by Billy Wilder.  A failing screenwriter Joe Gillis, fleeing from repo men, winds up living with failed diva Norma Desmond. The collaboration makes sense as a business, but she demands affection from him while his romantic attentions are elsewhere, another female writer, much younger. Jealousy leads to a tragic ending, and the movie is narrated by Joe’s ghost. Norma imagines she will regain her fame as she goes off to prison. 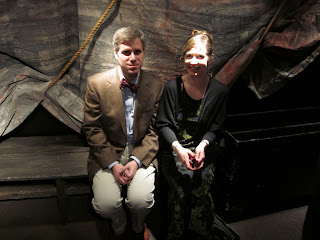 The story sounds corny, but what you experience from either the musical or movie is important, particularly if you want to get a movie made. Maybe the message is cynical: you have to “sleep” with the right person. To their credit, the movie and musical both present some of the political problems with movie production back then, as documented in Tim Wu’s book “The Master Switch”.  Zukor’s Paramount demanded too much vertical control of everything.

The Signature stage production was arena-like, on 3 sides (the theater has amazing technical facility for stagecraft as demonstrated by this production.  The effect is that of not just a 3-D movie, but a 4-D, as your coordinates in the audience affect what you experience.

Florence Lacey plays Norma, and she could do double drag on the Town DC stage if ever invited. D.B. Bonds plays Joe, and he quickly becomes puzzled by what’s expected to sell his writing. Does it matter how a writer gets dressed?  Well, the dressing room scene is a bit both homo- and hetero-erotic, as Joe is revealed (“thmooth”), to Norma’s delight; she will later tease him on the swimming pool patio (he winds up in the pool gone in the film).  There is a line to the effect that you shouldn’t give away your ideas to other writers (hence Hollywood’s “third party rule” meaning everyone needs an agent to approach a studio or major production company.

The stage production uses the BW “road” scenes from the film, projected behind stage, with a film noir effect.
The music has a wonderful lilt and sweep, and some of the orchestral passages have complex syncopation and changing rapid meters. The very ending crashes down on loud C-minor octaves and terminates abruptly, as Norma must go to her doom, despite her delirium (“I’m ready for my close-up”).
.
Above: Norma's demise in the movie.
Posted by Bill Boushka at 8:10 PM No comments: 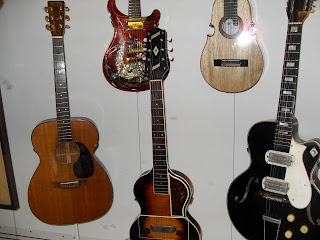 This short animated film (10 min) by “Turtlespameater” (that is, Kyle Bell), “The Animated Life of Dr. Shinichi Suzuki” (funds: “none”) on YouTube sums up the history of Japanese violinist Shinichi Suzuki and his method of teaching very young pupils violin, where music becomes a basic skill as fundamental as speech.
Suzuki, who died at 99 in 1998, had established his violin teaching method by the late 1950s. The story comes up in an extended obituary by Matt Schudel in the Washington Post Metro Section, p. C6, Sunday Feb. 6, 2011, of violin teacher John Kendall, who died in Michigan recently at age 93, article here. He taught at Oberlin College and then Muskingum University, both in Ohio, and used Suzuki’s method.
First picture: "stringed instruments" at the Smithsonian, Washington DC
Second picture: at Oberlin College, Oct. 2010 (personal trip), the famous "hiking trail" park on Route 58, across from the Oberlin Inn. 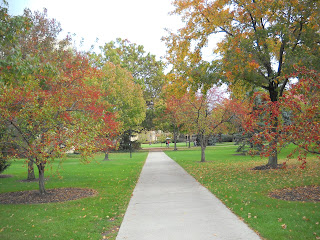 Posted by Bill Boushka at 12:11 PM No comments: 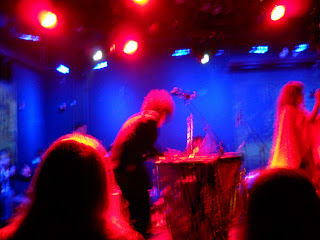 Michael Cieply has a recent story in various media (including the New York Times Business Day Jan. 31) about a new model for film music. A movie production company signs a contract with a UK company called “The Cutting Edge”, which takes over the entire responsibility for the film music and gets more ownership and distribution rights for the music.  The increased revenue  and economy of scale enables the production to hire larger orchestras and more expensive artists to “get the music right”.  The Live Mint link is here.
The Cutting Edge has its own account of its work for “The King’s Speech” here.  My main review of the film is on the movies blog Dec. 20.
Could the Cutting Edge help new composers get into film?
Picture: Le Poisson Rouge, NYC, Oct. 2010.
Posted by Bill Boushka at 8:09 PM No comments: