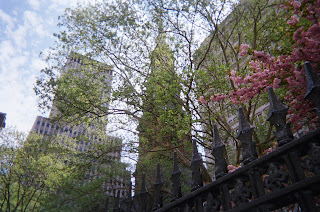 I was struck by some discussion by composer Timo Andres on his blog about an exploratory performance of a late work by French “spectral” composer Gerard Grisey, just before his death from a ruptured aneurysm (lesson learned) in 199, the posting “Conceptual Dissonance” here.  There was some Twitter clatter over all this, but what comes across here is a theory of how to compose a long, avant-garde piece and hold people’s interest (to talk about this in contraposition).

I pulled up some YouTube videos excerpted from “Quatre chants pour franchir la seuil”, (“Four songs to cross the threshold”) by Gerard Grisey, such as this one of the second movement “Interlude : II. La mort de la civilisation (“The death of civilization”), Catherine Dubosc, soprano, Klangforum Wien, Sylvain Cambreling, conductor.

. There is another Youtube excerpt with Barbara Hannigan (mentioned in Andres’s post) as soprano and the Contemporary European Ensemble, where Hannigan discusses the music, in French. I get the impression tha this music ponders the existential challenges to our sense of self-projection through "civilization", warning us that, like the Maya, we can fail. That's a downer for people who want to be entertained.

In general, the music vaguely reminded me of something like Boulez’s “Pli Selon Pli” (“Fold by Fold”), which I have on a CD somewhere, maybe some harkening back to “Pierrot”. I really didn’t pick up the microtones or quarter tones, but they’d be hard to discern in voice.

The post brought me back to a recollection of my own piano days. In May 1958, when I was finishing the ninth grade, my piano teacher suddenly died of colon cancer at 57, and I was really shocked at the time. I soon continued the lessons with another teacher who liked modern music, and soon read about the modern composers and even encountered the notion of quarter tones as well as formal “twelve tone rows”, which aren’t used as often as people think. In time, my ear would accept something like Alban Berg’s "Lulu" as lush, romantic music; whereas something like Grisey sounds mechanical (“spectral”) to me. (The second piano teacher would eventually go deaf.)

For me, postromanticism was the right transition into modernity. Mahler took us through that (it sometimes seems that contemporary music begins with the first movement of the Mahler Ninth. There is a kind of form, even if the music is episodic, that takes us along. When one comes to Stravinsky, it seems like there is negation of emotion, but not really; in "Sacre", the little episodes of massed sound (with the dancing) carry us along. But somewhere along the way, modern music started becoming what it always was, mathematics for its own sake, a map of the mind of Stephen Hawking (and maybe of some of his dire warnings).

The opening of the “Antennae” movement from Timo Andres’s “Shy and Mightly” is used in the background of a vimeo video from the Kaufman Center Ecstatic Music Festival, as here

I may have heard a bit of this music (“Antennae”) on my car radio on Sirius once or twice; “Antennae” and “Flirtations” seem to catch the ear quickly. (They’re some distance away emotionally from Josh Groban singing “Hidden Away” on the next channel as you go up I-95 [buy that legally here].)

You can go to the site for his next concert with the Metropolis Ensemble (starts Dec. 9), to this link and play videos of his “I Found It By The Sea” for piano and chamber orchestra (about 12 min), apparently in high def and wide screen, and a video of the Piano Concerto “Home Stretch” (reviewed here Nov. 18) and one of the Paraphrases of Themes of Brian Eno (composer of many scores, such as “Money Never Sleeps” and “For All Mankind”, reviewed on my movies blog Dec 8 by coincidence). The last two of these were performed at the Trinity Church on Wall Street (near the 9/11 site). The last of the pieces evokes a mood a bit like a “Night Music” movement from Mahler’s Seventh (although there are more different motifs than in one of those aforementioned intermezzo movements); the piano is “just” an instrument of the orchestra. The first of these (what did I find? A UFO?) has the flavor of the Richard Strauss Metamorphesen, with a little more polytonal dissonance.
Posted by Bill Boushka at 6:48 PM