"Agecroft Hall" in Richmond provides a museum of social changes 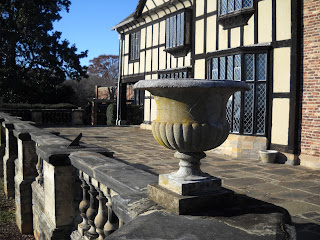 Today, I took an “accidental” tour of Agecroft Hall in the Windsor Farms area of Richmond, VA, near Carytown.

The Tudor estate had belonged to the Langley and Dautesey families in Lancashire England as far back as the 15th Century, as the Renaissance was progressing. In 1925, Richmond native Thomas C. Williams bought it at auction, tore it down and reassembled a smaller version in Richmond, which opened in 1942.

The tour starts with a 12-minute film of the same name “Agecroft Hall”.

All men of the manor were expected to learn music, which was played on a guitar-like case or lute (as in Resphigi's dance set). Music was written with staves facing upside down for dual players.  The printing press was recent, and book ownership was a sign of status; many books had been hand copies.

The tour emphasizes the social structures of 15th century life, which assigned people stations and roles in life which their clothing and behaviors in the castle depicted. Privacy and consent (and equality) as we understand the notions today were non-existent. People slept multiple families to a bed, and even inns sold spots on beds with multiple people.

It gives us cause to rethink our notions of personal autonomy today, where problems of sustainability are causing us to rethink our ideas of how the rights of the individual and of others in a family or group to count on interdependence must balance.

The link for the estate is here.

I had fun choosing this particular painting online that now hangs in my downtown office, from Wahooart.co, who sells canvas prints of art masterpieces. While the original is treasured in some art museum in England, my print http://EN.WahooArt.com/A55A04/w.nsf/Opra/BRUE-8LHS4U, of this painting by Edward Burne-Jones is very much appreciated by my staff and clients. The print quality is really excellent.