Roast of Arlington VA music minister brings out some new anthems, and some Vaughn Williams 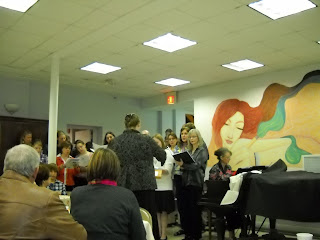 On Sunday, Oct. 31, the Trinity Presbyterian Church in Arlington VA gave a “roast” to the minister of music Carol Feather Martin.

The program included two new anthems composed (words and music) by pastor Judith Fulp-Eickstaedt, with chorus and piano, both sunny-sounding works in major keys. The church service also included a setting of one of the English Country Songs, of Ralph Vaughn Williams (1906), “Music’s Powerful Art”, with words by Fulp-Eickstaedt.

The pastoral folk song music may be what we think of when we contemplate Vaughn Williams, but often his music was powerful and virile. Consider the Symphony #4 in F Minor (with its outright anger), or the noble Symphony #8 in D Minor, or the exhuberant Symphony #2 in G (“London”). Of course, there is the early Symphony #1, the Sea Symphony (see April 13, 2008 here). But my favorite Vaughn Williams is the early Brahmsian choral song “Toward the Unknown Region”. And on many Christmas days, I’ve played Willcocks’s Hodie, on EMI-Angel.
Posted by Bill Boushka at 3:35 PM