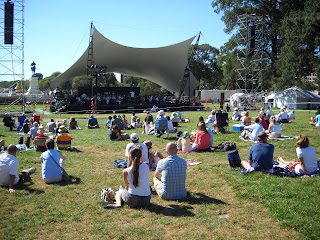 The National Symphony Orchestra held its “dress rehearsal” for the Labor Day Weekend concert Sunday afternoon at 3:30 on the West Lawn of the Capitol, link here.

No program was announced, and conductor Emil de Cou often rehearsed some portions, talking about “dal segno” and the right volumes for the trombones and trumpets.

What I could identify was an orchestral setting of “Blue Moon”, then the “Carousel Waltz” from the Rodgers and Hammerstein musical (remember the “Soliloquy” “My boy Bill” from that musical? rather expressive of fatherhood values), some of Aaron Copland’s “Tender Land”, John Williams “Raiders of the Lost Ark”, the soundtrack of “Exodus”, choruses from “Guys and Dolls”, and a movie medley starting with Newman’s 20th Century Fox trademark, then moving on to Lawrence of Arabia and The E.T. How about the musical trademarks for Warner Brothers (“As Time Goes By” from Casablanca), Universal, Columbia, and most of all LionsGate? (or try “Wiseau Films” from “The Room”).   One other thing: the "polytonality" at the beginning of the Carousel Waltz has always sounded a little contrived. But it brings back memories of childhood. 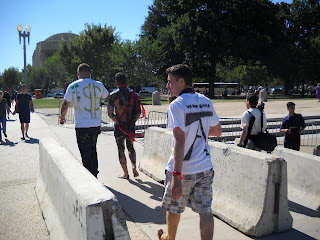 Outside the entry gate, I saw a demonstrator smudged with fossil fuels. Security would not let people take pictures of their operation. People talked in a number of languages, including Russian.

Last picture: below: That’s the best I can do for bike enthusiasts, 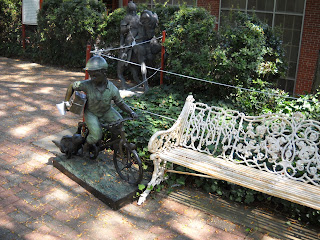