"Some Connecticut Gospel" by Tim Andres available at WQXR 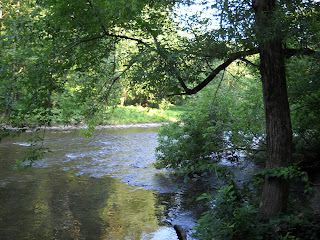 The Connecticut piece sounds like a passacaglia (or perhaps [wiki url] chaconne, and the meter is not always triple) to me, over a ground bass, rising and falling. It does indeed remind one somewhat of the music of Charles Ives (which itself is varied: that composer’s “The Unanswered Question” always makes me think of the surface of Mars). Andres offers an interesting perspective of the “least New England-like” of the New England states in which he grew up.

I drove up the Connecticut Turnpike myself on a mild January 1, 2003, in a driving rain, on the way to meet filmmaker Gode Davis (“An American Lynching” site) in Rhode Island. I still remember the day.

I also remember a winter bus trip through the state in a snowstorm in late January 1965, on the way to meet friends at Amherst College in Massachusetts (more New England-like) for a hike up Mount Greylock in showshoes. I specifically remember the stop in Hartford, now the home of a major part of ING (aka Aetna), my last major employer before "retirement".  And I also recall a boyhood trip (around age 8) to a family in Waterbury, CT; that city would become a focus of Ken Burns's documentary "The War".

The WQXR site offers an embed of the composition.

I still can't way to hear Mr. Andres's "polytonal adaptation" of the Mozart Coronation Concerto. (The explanatory link with the Metropolis Enemble (aka Smallville?) is here  What does Mozart sound like with polytonality, something like neoclassical Stravinsky or Prokofiev?.)

Picture is from a state park near Baltimore, MD (not Conn.)
Posted by Bill Boushka at 4:38 PM