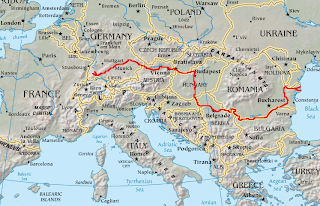 PBS airs the New Years Celebration from Vienna several times, with this schedule for WETA 26 in Washington DC (link)

Georges Pretre conducts the program of Strauss waltzes and polkas, and Offenbach. The program opens with the Die Fledermaus overture, which itself consists mostly of waltz sequences. It concluded with the Blue Danube Waltz, made famous in “2001 A Space Odyssey”. There was a Champaign Polka and a “One Heart One Mind” waltz.

The concert film showed chefs making Austrian candies (perhaps suitable for “The Sound of Music”), working deftly with all kinds of kitchen implements to make the candies and cake frostings into art forms, inviting probably for Martha Stewart. The Danube waltz was accompanied by scenery along the river, including lowland scenes from Romania.

I can remember having some 10-inch LP’s of the Strauss waltzes in themed 1950s. One paired the Blue Danube with the Emperor Waltz, and another featured Die Fledermaus. So this music was impressed well on my ear by about age 10 or so.

Yet, in time, the Viennese compositional style would become synonymous with a branch of “German romanticism” – starting with Mozart, to Schubert, to Bruckner, Mahler and Richard Strauss, to Schoenberg and Berg, composers whose music, despite the atonality, would still come across as postromantic music much of the time. (Berg’s Three Pieces for Orchestra is essentially a short (and sometimes violent) postromantic symphony; Schoenberg’s Piano Concerto has plenty of schmaltz). Composers from other countries, like Alexander Zemlinksky, would be associated with the school. This all somehow links back to the Strauss waltzes.

Beethoven, Brahms and Schumann (following Haydn and perhaps Wilms, recently popular) and even Dvorak (Bohemia) seem (to me) like another and expressively distinct branch of “German romanticism”, as do Liszt (actually Hungarian) and Wagner. For example, Mahler, for all his references to the Beethoven Ninth, has always sounded more related to Schubert to me than to Beethoven. And the Schubert Great C Major, with its almost hypnotic effectiveness in its repeated notes and unresolved dissonances, is almost like a “Bruckner symphony.”