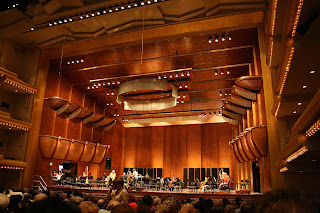 Summer in New York City moved into fall at 8 PM tonight at the Lincoln Center, with the opening of the 2009-2010 Season, broadcast on PBS, with the main link here.

The new music director is Allan Gilbert, and the work opened with a tone poem “EXPO” by the composer in residence, 51 year old Magnus Lindberg. The work was in a typical polytonal style, almost reminding one of Bernard Herrmann.

Renee Fleming, in a bright blue dress, performed the song cycle by Oliver Messiaen, “Poemes pour Mi” (1936). The work comprises nine short songs and sounds esoteric. In the middle, Gilbert suddenly had to turn a lot of pages of score. The orchestral writing had a lot of parallelisms in the woodwinds. The music was the composer’s celebration of his marriage, and the work (in the text of the poems) is said to celebrate marital passions, something missing from modern culture according to conservative movie critics like Michael Medved. Here’s another link describing the piece which can be played with piano instead of orchestra (although that’s hard to imagine).

If you want an interesting comparison to the Messiaen, try “Reflections on James Joyce” (2004), here by Tudor Dominik Maican, written when he was 15 (piano, flute and voice – when I see the Washington Post offer audio files of new music on its website, I remember that the newspaper had a Sousa march named after it). This sort of music takes the Mahler concept of art song to the ultimate.

The conclusion was Berlioz’s warhorse, the Symphonie Fantastique in C Major. Although some writers thought of this music as a drug trip, even back in the 1960s, this performance was no-nonsense, reading it as if it came from German (rather than Gallic) symphonic repertoire. Gilbert even took the first movement repeat. The signature performance for this work was the Command/Grand Award recording with Vandernoot in 1963, on 35 mm film to record (in the days that elliptical styli were coming into use); the brass in the “March to the Scaffold” really snarls and brings back the days of the guillotine.

Wikipedia attribution link for Avery Fisher Hall at Lincoln Center in New York (GNU license). The hall looks different than it did in the 1970s, when I went to many concerts.
Posted by Bill Boushka at 7:24 PM