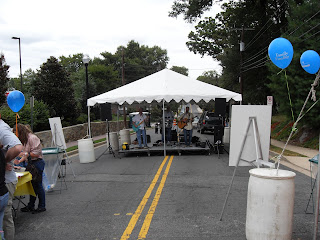 On Saturday, September 27, 2009, the Virginia Hospital Center in Arlington VA (along with several other corporations in the health care business, including Blue plans) has sponsored a “Family and Friends” street fair on 16th Street, in front of the Hospital.

A country-and-western group (not identified) is performing with elecrtic guitars on the stage. (“It might get loud.”) The music was pretty much what you would hear at a country-and-western bar (like Remington’s in Washington or the RoundUp in Dallas). The fair should go on all afternoon, although in sprinkly and cloudy weather.

The “teddy bear” (not “The Chicken” at MLB parks) runs around the crowd to entertain it, and a taco stand serves low-fat high-fiber taco sandwiches that would have pleased low fat diet advocate Gabe Mirkin in the 1990s. 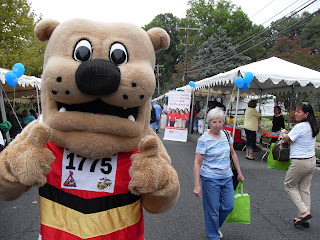