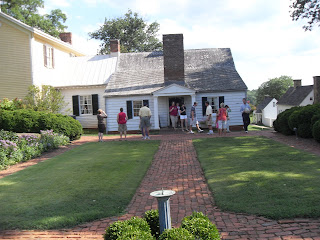 Yesterday I also visited the former home of James Monroe, (the facility is called Ashlawn-Highland), near Charlottesville. The facility now belongs to the College of William and Mary.

The newer, two-story building was constructed in the late 19th Century after a fire, and Monroe never saw that building. But in the original, one-level portion, in the salon there was a curious fortepiano http://en.wikipedia.org/wiki/Fortepiano that appeared to span only a little more than five octaves, about 66 keys. Some of Mozart’s piano sonatas were composed for a more restricted piano range and timber. 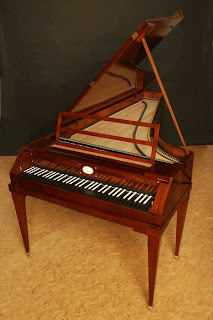 There was a copy of sheet music on top with the heading “Sonatas” but I couldn’t see the composer’s name (“do not touch”). The music had a lot of eighth-note scales in the natural A minor key and looked perfunctory. The sonata may have been by Domenico Scarlatti or Domenic Paradies. The guide said that Monroe's older daughter played te instrument "badly."

The “staff” area of the new building had a full piano visible, and I don’t know why it wasn’t in the public areas for the tour.

The facility did not allow indoor picture taking, so I can’t show the actual piano here.

Attribution link for Wikimedia GNU picture of fortepiano.
Posted by Bill Boushka at 4:23 AM