A Capitol Fourth (Independence Day 233) on the Mall 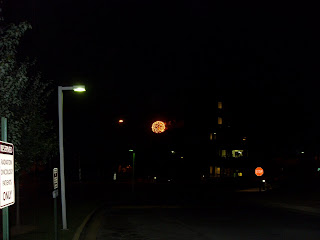 On Saturday, July 4, 2009 PBS WETA broadcast the 233rd birthday party for the nation from the Mall in Washington, with a concert that started at 8 PM, under cloudy, cooler than usual skies. The Nationals had played in the afternoon and actually won, for a change. The website for the performance is here.

Jimmy Smits was the host. Aretha Franklin sang a rhapsodic Star Spangled Banner, and Barry Manilow came on with a medley, but he didn’t sing “Rhinestone Cowboy” (link) which I remember hearing so many times around 1976 when working the night shift at NBC.

The highlight of the concert, for me at least, was George Gershwin’s "Rhapsody in Blue" (E Major) in a two piano version with dual soloists Michael Feinstein and Andrew von Oeven. The Steinways were put in symmetrical plush position. Both pianists used a lot of cross-hands and aggressive piano style, already mentioned in the May 14 review of the Andres concert. Erich Kunzel conducted the National Symphony.

Sesame Street came on with its Muppets (remember the “Five People in my Family” stuff from about 1970), as did the Cast of Jersey Boys.

Manilow did a reprise “Let Freedom Ring,” whence the fireworks from the Reflecting Pool area started, and then the orchestra played the last eight or so minutes (the recapitulation and coda) of Tchaikowsky’s “1812 Overture Solennel”. I think the piece works much better if played in its entirety. The Choral Arts Society of Washington joined in with a chorus that sounded like it came from “Reds”. I remember a similar choral passage from Prince Igor, the coronation scene (Mussorgsky), that played on a stereo back in the 1970s during a particular “first” for me.

The Military District of Washington bands and choruses performed afterward as the fireworks continued much longer than in past years.

I remember some other concerts in person, such as 1997 and 2000 particularly. In 2000, in fact, I flew back to Minneapolis early July 5 (diverted by storms to Duluth), only to find another “Fourth” concert in suburban Minneapolis on July 6!

Today is just one of remembrance for the iconcolastic play named after this day (reviewed April 2007 on this blog).
Posted by Bill Boushka at 7:37 PM