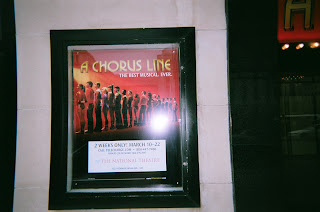 The African American Ayers, raised in Cleveland, had gotten in to Julliard at 19. But suddenly his performance slipped and he wound up in Bellevue Hospital in New York. He was diagnosed with paranoid schizophrenia but drug treatments available in the 1970s were not effective and neither was electroshock later.

The CBS link is here.

With the help of Mr. Lopez, Ayers met some members of the Los Angeles Philharmonic at the new Walt Disney Hall. He actually took violin lessons from one orchestra member. The show aired a few segments from the Brahms Piano Concerto #2 and Beethoven’s Eroica Symphony.

A compendium of the LA Times stories by Lopez appears here.

The friendship is the subject of an upcoming film “The Soloist” by director Joe Wright, from Dreamworks (due at the end of April 2009).

As a note on the Beethoven Eroica: Yesterday, I heard on the radio Haydn’s Symphony #91 in E-flat, not played often. The first movement is also in ¾ time and has some of the same progressive dissonance (in rapid sequential chords) and unresolved tension that is so effective in the Eroica. Perhaps the Haydn work did provide an inspiration.
Posted by Bill Boushka at 6:33 PM No comments: 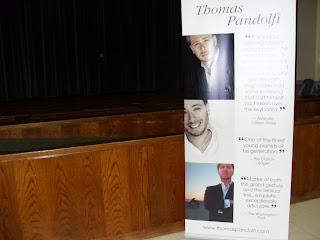 Pianist Thomas Pandolfi gave his second piano recital at the First Baptist Church of Washington DC on Sunday March 15, 2009, at 4 PM. The recital was well attended.

Some of the program duplicates a recital there on February 24, 2008, already reviewed. This included opening with the heaven-storming Liszt Dante Santa (D Minor).

In the first half of the program, he added the Beethoven Piano Sonata #8 in C Minor, the Pathetique (Op. 13).

The Sonata dates from about 1797 and is actually from the early period, even though it already sounds “romantic” to most ears. The “sturm and drang” is pronounced, with extreme contrasts in tempo in the first movement, a practice that Beethoven would adopt later frequently. By way of comparison, the C Minor Piano Concerto (#3) sounds more “classical” to most ears. The strettos and harmonies in this work have never sounded as original to me as the music in the middle period, however. In some ways, the Pathetique reminds me more of the “Mannheim Rocket” Sonata #1 in F Minor than the later Appassionata. Pandolfi’s performance tended to compress the strettos and transitions a bit. The performance took about 16 minutes, but it sounded a bit “Toscanini-like.” There was no first movement repeat.

It seems that none of Beethoven's minor-keyed Piano Sonatas go into major for a triumphant ending. Beethoven would introduce the romantic practice in his 5th and 9th symphonies. The Third Piano Concerto goes into major, but the effect seems light by comparison. Mozart does this effectively in his 20th Piano Concerto (but stays in minor in the 24th).

It's worthy of note that Beethoven's Piano Sonata #30 (E Major) figures into a critical scene in the gay film "Trick" and that particular music is indeed an interesting and ponderous choice. The "Appassionata" (#23) builds a critical episode of the series "Everwood" which later will use #17 (the "Tempest").

He added a Liszt Hungarian Rhapsody in C# Minor, not the hackneyed #2, but instead #12 (dedicated to Joseph Joachim) a piece that is a bit more subtle.

After the intermission he repeated his medley of Gershwin songs, recreating the tender family culture of the 1930s and 1940s (the epic time that my parents met and married and brought me into the world), a world that has changed so much since. The performance got me thinking about what their life had been like then. Then he played a transcription of Gershwin’s Piano Concerto in F for Piano alone. He says he write all these Gershwin transcriptions and improvisations himself. It’s an effective way to get to play the music in public, but without the orchestra it’s a bit like a reading of a screenplay rather than the full music. Yet, it still dazzled. This is music with real emotional impact. 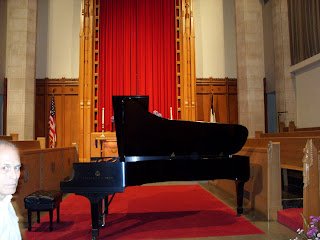 Posted by Bill Boushka at 6:42 PM No comments:

"A Wayfarer's Journey: Listening to Mahler": Instant play on Netflix 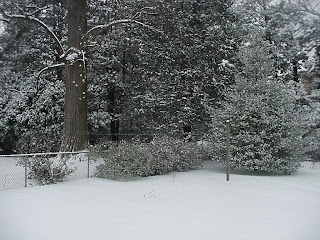 Christoph Eschenbach conducts the Curtis Symphony orchestra, in a documentary that walks through Mahler’s life. In the first hour or so, all of the music comes from the first four symphonies and the Songs of a Wayfarer. The middle symphonies, including the famous Adagietto in the Fifth Symphony, come into the narrative, and the Ninth Symphony is excerpted at the end. The narrative makes the interesting point that the hesitating repeated notes that open the first movement of the Ninth represent a heart arrhythmia which Mahler already had. I have one to, and think little of it (it is controlled by atenolol).

The narrative emphasizes that Mahler viewed music as an experience of “the moment.” Maher also said that he does not compose so much as he feels that he is composed. The film covers Mahler’s music an healing, both for the elderly and for children recovering from cancer treatment.

The film also covers Mahler’s mandatory conversion to Catholicism in 1897 and a condition of employment as a conductor, but in his own mind he prayed only to one God, not a trinity. Nevertheless, he wrote the Resurrection Symphony and later the Faustian Symphony of a Thousand (not covered in the film) as a kind of all-inclusive view; the oratorio-like Eighth Symphony is a good complement to operas (on similar subject matter) by Boito, Gounod, Berlioz, and even Mozart.

Much of his middle period music (the Sixth symphony) relates to his marriage to Alma and the loss of his daughter (leading to the song cycle Kindertotenlieder). Mahler did a lot of his composing in a one room hut on a lake in Austria.

Much of the early part of the film focuses on the most winsome passages from the First Symphony, such as the middle section of the slow movement, and then the second subject of the finale, and then the “He Shall Reign” passage near the end of the Finale.

A pensive passage from Mahler's one movement Piano Quartet in A Minor, his only chamber work, also appears.

I got to know much of Mahler’s music in high school. On Saturday nights, WGMS in Washington those days played a “Festival of Music” and once in a while played a Mahler Symphony. In those days, Bruno Walter was the only major conductor, and the symphonies 6-8 did not come into common performance until the 1960s after Leonard Bernstein’s support. More than any other composer’s music, passages from the early Mahler symphonies recall some of the wondrous and traumatic events of my high school to college transition: the Honor Society, the long “prom” trip to Mount Washington, the intense summer friendships, the William and Mary expulsion, the NIH hospitalization, the settle-down at GWU, then graduate school, and finally, ironically, the Army. During all this period (encompassing the Cuban Missile Crisis, the Kennedy Assassination, the Civil Rights Movement, Vietnam, finally leading to Watergate) I got to know Mahler, almost every note. Specific passages recall specific personal incidents, in fact. Mahler’s music seems to mark the history of my own coming of age as much as it did his own life.
Posted by Bill Boushka at 8:05 PM 1 comment: