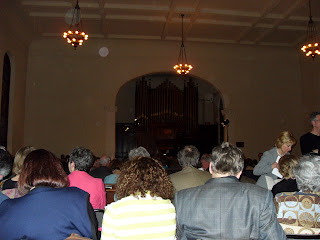 All three works on the program were in the strings-friendly key of D Major.

The program opened with Tudor Dominik Maican ('s) String Quartet #3 in D. The work is a little sunnier than some of his other, and still sounds a bit like Bartok, but with a slightly Gallic touch – I can sort of imagine myself walking the Bastille section of Paris in the “Allegro Scherzando” finale. Maican’s notes mention Greek folk music (as well as Romanian) as other influences. Now, here I digress more. “Scherzando is an odd notation for a finale – but Rachmaninoff used it in his Second Piano Concerto and built up to his famous climax. (George Perle used this in his Sinfonietta II). Like the Rachmaninoff, Maican assimilates the music from the first two movements to make the final Scherzo, but here something strange happens – the music evaporates quickly, ending in a 5-note figure, almost like this was a kind of chemistry lab experiment! I thought there should be a “real” finale, but, not – that’s what happens here when you put the opposite polarities together – nullification, or “pair annihilation” as in physics. Maybe there is a bit of “The Universe” here. (Come to think of it, something like this happens in the last movement of Haydn's "Farewell Symphony" but there the sublimation takes some time.)

Nevertheless, the first movement was a full sonata (I think) and actually builds up to a majestic climax, with full fortissimo chords filled with overtones at the end. The slow movement really is about thought (not feelings), and ponders a number of slow figurations, almost like a chaconne, it sounded (the marking was Andante molto cantabile but it sounded more like a Lento). I wondered how the quartet learned the music – did he have to travel to Russia, or did he coach them with broadband Internet?

Dom writes an interesting comment (in the notes) comparing the first movement’s source to “people like me: young, full of life, and ready at anytime for new adventures”. Of course, others have to be willing to let you go on the adventures – my own story is about how that got interrupted in college (elsewhere on the blogs – last Thursday on the main blog). I thought of my experiences with the “Paul Rosenfels community” (now, or, previously, Ninth Street Center) – so eager to throw off conventionality for psychological growth – yet, paradoxically back in the 1970s, having to set up a sheltered, almost closed community for itself in the East Village. The psychological language in his notes was familiar to me. Dom, tieless, presented a bouquet of flowers to the Quartet.

The rest of the program comprised two warhorses of Russian quartet literature. Alexander Borodin, remember, was a chemist, and started out with music as an avocation (just as I was encouraged to do – I started out that forlorn semester at William and Mary in 1961 as a chemistry major, advanced into Qual no less). All things considered, he accomplished a lot. Tonight, the Quartet performed his best-known String Quartet #2 in D. Not only the Nocturne is well known (“This Is My Beloved” from “Kismet”), so is the Trio of the Scherzo. The St. Petersburg Quartet took the Romance fast, whereas they took Maican’s Andante slow, which made me wonder if technical familiarity could be an issue. The finale of the Borodin has a “very slow” lead theme (though marked Andante) which leads into the Sonata Allegro and this seems to be a device more common in Beethoven.

At intermission, I brought up my theory that “Smallville” ought to be an opera – yes – he could write it, and the “secret keeping” (or “don’t tell”) has obvious political significance now. The episode name I was grasping for (when talking to him) was “The Pilot”. (Yup, Tom Welling plays the part of Clark like he was performing ballet; Lex, I’m not so sure.)

The “featured work” after the Intermission was Pyotr Ilyich Tchaikivsky’s String Quartet #1 in D. The famous movement is the Andante Cantabile in B-flat. The first movement, however, starting as “Moderato e semplice” turns into wound-up winter low-pressure and races toward a ballet-like conclusion that anticipates the Violin Concerto the same key. The last movement seems a little anti-climactic to me, in contrast to many of Tchaikovksy’s works (some of which find there way into the musical background of “Smallville”). Tchaikovksy's other two quartets are less known, but the third is in the unusual (for strings) key of E-flat minor.

The Quartet, as an encore, played a transcription of the “Golliwog’s Cakewalk” from Claude Debussy’s “Children’s Corner Suite”. The Gallic spirit is so profuse that it sounds like French cooking.

One other note about Maican’s music: a couple themes (from the Second Quartet, and Solaris) bring the opening motive of Saint-Saens’s Fourth Piano Concerto to mind. It’s probably subconscious. And, Saint-Saens is – after all – French.

Ernst Von Dohnanyi (or Erno) composed his Op. 1 Piano Quintet in C Minor that still thrills chamber music enthusiasts today, especially the finale with its "Amen". That work was composed at age 18.

Back to my telepathy experiments!

Tudor Dominik Maican and Timothy Andres will give a concert at Strathmore in North Bethesda, Montgomery County, MD, Thursday May 14, 2009, with link here. (Note: there has been a change -- please note what the Strathmore link says; anyone with information can comment.) 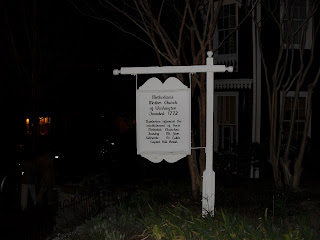 Note on these pictures: The last picture was taken Feb. 21 but is a bit blurred because of a technical camera malfunction, since fixed. The other two pictures were taken April 4. 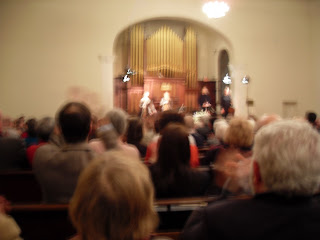