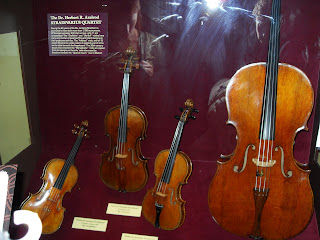 The work of English cellist Jacqueline Mary Du Pre, who would die tragically at 42 in 1987 after battling multiple sclerosis, is honored in a Netflix DVD from “Opus Arte” and Allegro Films, with two performances filmed by Christopher Nupen. The title of the DVD is “Jacqueline Du Pre: in Portrait”.

The longer film is a 1967 performance of Sir Edward Elgar’s last major work, the Cello Concerto in E minor (Op 85), with which she is particularly associated. The film points out that it is a particularly melancholy work, ending on a loud minor chord rather than in triumphant major (as would Dvorak’s). The performance is shown in black and white, and is conducted by her husband, Daniel Barenboim, very youthful then. He points out that she was very much a free spirit in her performances. The film starts with a 40-minute biographical prologue covering her career.

For my money, my own favorite Elgar has always been the Enigma Variations (portraits of friends), and the Symphony #1 in A-flat, which opens in that key but which migrates to the distant tritone key of D minor for the main body of the first movement Sonata Allegro. The 1984 film by Hugh Hudson “Greystoke: The Legend of Tarzan, Lord of the Apes” used this symphony heavily.

The second film is a color performance of Ludwig Van Beethoven’s “Ghost” Piano Trio No. 5 (Op. 70, #1) , with Daniel Barenboim and Pinchas Zuckerman. There is an opening reference to a negative comment made by Beethoven contemporary Ludwig Spohr about its premier performance.
Posted by Bill Boushka at 10:06 AM