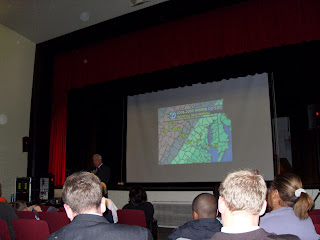 I typically emphasis “artistic” content on the drama or stage works blog, but I think science is OK too. Tonight, on the spur of the moment, after hearing WJLA-7 TV’s meteorologist Doug Hill invite everybody to Wakefield High School in Arlington for his presentation and Q&A on the weather. Yes, the DC area is likely to have a lot more snow this winter than last.

The 110 minute program featured some video of previous Washington DC area snowstorms, a video of how the meteorology department of a big city television station works (24x7), and a brief presentation by Dominion Power on energy efficiency. The station gave handed out gift bags that included emergency tips, including duct tape and storing enough food for 1600 calories per person a day. But that goes beyond concerns over even big Noreaster type snows, to eventualities that could be far worse.

The best question came from a history teacher, and it was about global warming and the melting of the ice caps. Hill surprised everyone with his answer. He referred to a Time article back in the spring of 1978 when everybody was concerned about global cooling, and there were ideas like dropping lampblack on the Arctic ice to melt some of it. I do remember that we had a very cool spring, after a cold snowy winter, in 1978 when I was living in New York City. He said, “there can be no consensus in science.” Hill acknowledged that the past two decades had been warmer, but would not say that the warming resulted from man’s activity. He also added that he felt that global warming had become as much a political as scientific problem. His answer sounded more like something one would see in a column in The Washington Times than The Washington Post! I do think, however, that Al Gore’s movie and book presenting compelling mathematical evidence (in terms of calculus and the behavior of temperature curves) that global warming is man-made.

Someone asked about the “The Perfect Storm” in the movie and Sebastian Junger’s book. That storm really did happen, he said, but the hypercane superstorm and instant freeze of “The Day After Tomorrow” cannot happen.
Posted by Bill Boushka at 8:25 PM