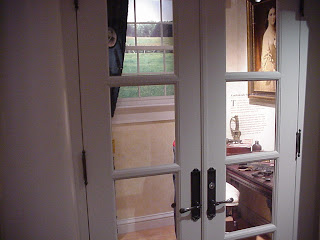 Today PBS broadcast opening night for the New York Philharmonic, with Lorin Maazel conducting the Berlioz “Roman Carnival Overture,” the funny Flute Concerto by Jacques Ibert (with Sir James Galway as the soloist), and Tchkovsky’s Fourth Symphony. The “coiled spring” coda of the first movement seemed a little rushed compared to other performances. Apparently the Philharmonic held a free dress rehearsal this morning. The performance link is here.

There have been disturbing reports that classical orchestra musicians and conductors face hearing loss over a lifetime if they are exposed to the brass and loud instruments of large romantic compositions. An article by Bernard D. Sherman, reprinted from “Early Music America” in 2000, “Losing Your Ears to Music: The hearing loss epidemic and musicians,” link here. The article talks about an incident where Wilhelm Furtwangler had trouble conducting one of his own works (the Second Symphony is quite heroic indeed) because of a lifetime of deafening from brass sections from Wagner, Bruckner and Mahler. Conductors emphasizing smaller works or works played by smaller ensembles may not have such an issue. I wonder about the orchestra players, whose exposure depends on their seating position relative to other sections of the orchestra.

Of course, the problem is well known among rock musicians (and disco dancers) but not so much in classical. There could be karma problems here.

I lost some hearing in my right ear at around 4000 cps on the rifle range in Basic Training in 1969. Coaching created a lot more exposure than firing. Afterward, I could hear your ears rings when I bit down. Yet, the television set in the barracks sent out a 15000 cps scanning tone, and I could hear that in both ears when in my 20s. We also hear that teenagers have cell phone ringtones pitched so high that their teachers can’t hear them.
Posted by Bill Boushka at 7:48 PM No comments:

Cat Show: getting there and parking was the challenge; biggest virtue is "an alert animal" 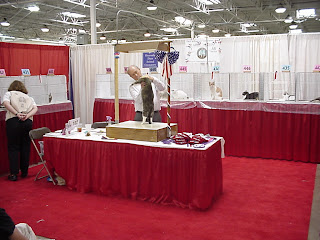 Well, today I visited the National Capital Cat Show at the Dulles Expo and Convention Center

The ads (at least in the Washington Times) included no driving directions, and I found it surprisingly hard to find from Route 28. It didn’t help that when I got to Route 28 on I-66 I had forgotten in which direction Route 50 was. Once I found it in the maze of industrial parks, I found all the parking lots full. And plenty of the surrounding businesses had “no expo parking, cars towed” signs. Finally, somebody pulled out. The show was packed today because everybody stayed home yesterday as Tropical Storm Hannah passed.

The cat is about the only animal that invites itself into a stranger’s home life. Mountain lions have been known to enter homes. Bears probably would if allowed to. Think about it: any animal that hunts game for a living has to have some smarts and problem-solving ability, which explains why most carnivores learn to accept man, as an “equal” (usually not as food, but there are exceptions). In Dallas, I was “adopted” by a male cat who could recognize the sound of my car, run to my apartment door, and would try to turn the door knob. Once inside, he would run for the refrigerator. He would sit on newspapers that I tried to read, and carry housekeys around the apartment in his mouth.

In an neighborhood, cats who are allowed to wander will memorize their entire territory, and remember every fence nearby mouse holes, and every water spicket that drips. If I make eye contact with a cat in a neighboring yard while walking past, she will come up to the sidewalk and watch.

At the show, while the exhibits of several hundred cats were separated by breeds, the main events seemed to the prize-winning show-and-tells. Cats would claw on their cages saying “I want go next.” The main virtue in the cat world, according to the judges, seems to be “an alert and lively animal.:
Posted by Bill Boushka at 1:20 PM No comments: 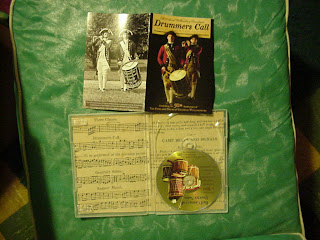 On Memorial Day, 1961, when I went on a Science Honor Society senior field trip (Washington-Lee High School) to Mt. Washington, NH, we stopped on the way back and watched a patriotic parade in Tilton, NH. I remember the little marching bands and drums, with a relentlessness that recalls the mood of the first movement of Mahler’s Third Symphony (which I would hear performed once in Minneapolis in 2000).

But the background of all this march music from Europe has a lot to do with the fife and drum corps of earlier centuries, according to a DVD from The Colonial Williamsburg Foundation, “Drummers Call: America’s Fife & Drum Tradition” (purchase link here. The 56 minute film is directed by Michael C. Durlind, with Abigail Schuman as executive producer.

Bill White, educational Program Director for the Colonial Williamsburg Foundation, speaks. Stewart Pittman is the music director and talks about how young people are taught to play the instruments in bands for demonstration and celebration today.

Let’s wrap up the issue of classical music first. The DVD maintains that a lot of music of Haydn and Mozart (especially Haydn, as with the Drumroll Symphonhy, #103) may have been inspired by marching bands in Viennese Europe, but the more obvious Romantic example is Mahler.

But file and drum music played an important military purpose during the Revolutionary War. Music was used to communicate to “our” soldiers (keeping them performing their tasks in unit cohesion) but was also used to signal military advantage to the opposition. That contradicts military communications practice today where secrecy is so important.

New England, especially the Connecticut River Valley (and, as I know, New Hampshire) has maintained the tradition of fife & drum, but the best known reenactments probably occur at Colonial Williamsburg. The film shows how teenagers (from corps all over the country) are trained in summer camps to perform in unison, where there is an emphasis on unity as well as conventional musicianship. Fife & drum units develop special skills of a social nature that go beyond what probably is normally experienced in high school orchestras and bands.

The manufacture of the drums, with rolling and treating of wood (rather than conventional lamination) is shown.

The Continental Congress actually regulated the composition of fife & drum companies, and indirectly that regulated other military music and how it was paid for. Some of the organization of military music units in the Armed Forces today is still determined by these old laws.

"Corps Stories: Memories of the Fifes and Drums of Colonial Williamsburg": (28 min) personal accounts of the difficulties of individual performers as they train. People could be demoted and forced to start over. Also, grade school kids, often not previously on their own from home, are brought in and taught by high school kids. There was an expectation of military bearing during the lessons and drill, and there is a bit of emulation of the military through a musical and artistic experience.

"Fifty Years Afoot": 12 minutes, stills, including some black-and-white from 1961 or so. It’s interesting (to me, at least) to see what Williamsburg looks like in BW. i wonder what that "bonfire of the vanities" picture is. It runs about 12 minutes.

The DVD includes a bonus CD “Half Century of Quarter Notes: Celebrating the 50th Anniversay: The Fifes & Drums of Colonial Williamsburg,” 72 minutes.
Posted by Bill Boushka at 8:21 AM No comments: