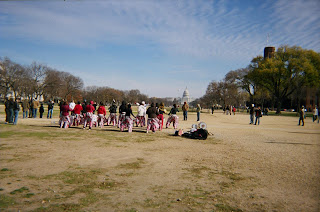 Well, I missed out on Gounod’s Romeo and Juliet live transmission (got sold out), but I had a sort of live event this weekend. Sunday, I found myself an accidental tourist at a 50th-plus wedding anniversary reception at a church, served a delicious lunch to be sure, but then expected to stay and pay homage to biological kinship relationships among people in an extended family that I did not know, when I am, as others who read my blogs know, incapable of creating such a family lineage myself. It was actually an uncomfortable position to be in, and maybe not appropriate. I will not name the family here, inasmuch as the gathering is “private” yet curiously very public. The individual and the social world around him come into interplay.

I did, wonder, though, what music has to say about this. There was a guest soloist from Europe, a tenor, and he sung “The Old Rugged Cross” in several variations which he improvised, the last variation nearly approaching twelve-tone music. It was interesting that an earthy old hymn, well liked in the African American community (it could almost fit in "Say Amen Somebody" (1982)), could amend itself to almost expressionistic treatment.

I often find singing repeated verses of the same hymn boring unless the organist/choirmaster varies the harmonies (don’t just transpose one key up). Some hymns, of the higher church variety, do get me going. They would include “All Creatures of our God and King” (the official Music Club Federation hymn when I took piano in the 1950s), “For All the Saints,” and the New Years Staple “O Lord Our Help in Ages Past.” Some of the better hymns are by “real” composers, not just Beethoven (the Ode to Joy), but Vaughn Williams, Stanford, and Perry. Mahler called the first movement of his Eight Symphony (“The Symphony of a Thousand”) a hymn (Veni, Creator Spiritus)

Of course, you expect these issues of personality to be dealt with in opera. So then I looked around for an opera that might simulate my social situation. I thought I could find it in Britten, or maybe in German or Viennese expressionism, in the post-romantic world following Strauss. I found here the 1988 Capriccio recording of Alexander Zemlinksy ‘s Der TraumGorge (“George the Dreamer”, liberetto by Leo Feld, in German) with Gerd Albrecht conducting the Frankfurt Radio Symphony Orchestra and Chorus, with Josef Protschka as Gorge, Janis Martin as Princess Gertraud, and Pamle Coburn as Greta, composed around 1907, contemporaneous with mid and late Mahler. Zemlinsky (born in Vienna though the name sounds Russian), wrote in the post-romantic Viennese style that really does bridge Mahler to Schoenberg and Berg. The writing, while expressive, is often sinewy. He wrote six string quartets (in various forms that anticipate later experiments by Berg like the “Lyric Suite” but that seem to be inspired by late Beethoven), and the “Lyric Symphony” which is often compared to Maher’s “Das Lied von der Erde” as well as several other quasi-symphony pieces. This particular opera is interesting because the protagonist, George, a pastor’s son, has, in a psychological sense, fled the practical world for a bookish one based on his own ideas and fantasy. (Hence the title of the opera.) He is, in a sense, “the little professor,” with his head in the clouds (as if Keanu Reeves could play him). George leaves a real world financee for what seems to be an imaginary princess out of his imagination, but in the opera she comes into reality. He has to deal with the resentment of the townspeople workers, who will exploit him for their “political” agenda. Eventually she becomes real enough that he can protect her and make his life real. The concept of the opera seems to deal with the individual’s own moral outlook fighting the collectivistic, adaptive demands of the society around him (certainly anticipating Bolshevism). The music seems to center around the key of E, and has a couple of martial climaxes, in the epilogue tails off into a dream world, pianissimo, without even the sense of resolution (like Wagner would have provided) that the story itself is supposed to provide. Or does it?

A recent film that deals with this idea of imaginary loves coming to life is MGM's "Lars and the Real Girl" (see my movies blog 12/18).
Posted by Bill Boushka at 11:48 AM