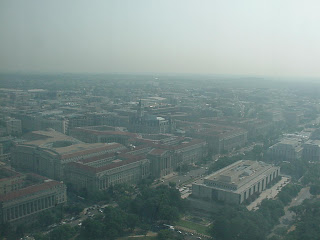 Senioritis, as a colloquial term, refers to the tendency of some high school seniors to slack off after getting college acceptance during their senior years at high school. This has become a big problem at some universities, who have sometimes withdrawn acceptances, or placed students on probation at admission.

The musical Senioritis(135 min) is produced by Cappies, and written by nine students in Virginia and Maryland. The book writers are Miriam Engle and Maggie Shaw; the music composers are Riley Keenan, Dustin Merrell, A. J. Pendola, Abi York; the lyrics are by Erick Pope and Maddie Underwood. The play is directed by Glen Hochkeppel. I attended a performance Aug. 5, 2007 at McLean High School in northern Va. The show started about twenty minutes late, as the production team set up digital recording and rehearsed the audience in applause, talking, and laughing, to add to the DVD, which will eventually be sold.

The musical is in two Acts, and seventeen scenes, with an intermission after Scene ten. Some scenes have more than one song, and others are all spoken. The stage props are rather simple but fill the wide stage with color, giving the effect of a 3-D movie of a musical of the “Hairspray” genre. It reminded me more of that than of the obvious “High School Musical.”

Nevertheless, the story concerns a number of students slacking off while producing their own musical, a “High School Mystical.” Some of the songs have surprising and amusing names, such as “C’s and D’s Are Very Good for You” (the teachers); “Senioropolis” (where the kids stage the musical in mock Greek times with togas and just a hint of dirty dancing), “Crackdown.” “Older Woman and a Younger Man”, “You’re Fired” and “Admission to Life” – which is what college is for.

In fact, there are some clever lines about other social issues, like a “global warming drill” or a line where one student fills out his college admission essay and wants to say, “If I don’t go to college, I’ll have a miserable life.” Later, the student contests what his father wants him to do with his life. There are little shreds of issues of great moral importance. The conspicuous regal character in "Mystical" seems to be called "Babushka" -- I'm not sure of the significance of using a Russian doll (there is actually a toy retail chain by that name, as in the Mall of America near Minneapolis) as character nickname.

Apparently this musical will be performed in the Kennedy Center lab, Aug 6-7.

Andrew Karlsruher has directed a short subject on this theme that Fox Searchlight Pictures is due to release this year.

In 1956, in 7th grade, I acted in the comic operetta "The Sunbonnet Girl" by Morgan and Johnson. The operetta seems to date back to about 1930, descriptive link here.
Posted by Bill Boushka at 3:32 PM