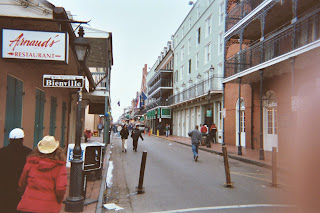 I recall seeing a full-blown production of this in 1996, I believe at the National Theater in downtown Washington. Besides the exhilaration of the music, I remember the moral of the story, where the character Joseph in Genesis rather believes he is a bit special because of his "gifts" -- seeing dreams and visions, where he draws attention to himself and makes himself a celebrity (when otherwise he would be the Biblical equivalent of the geeky Nick Fallon in "Days of our Lives"), and eventually gains favor in Egypt with his dreams, verbal and intellectual skills, and is able to save the people from famine. We all know the Biblical story, that would lead the tribes of Israel to Egypt, setting up Moses and the Exodus. But the "moral edge" from the tale comes from the way he draws the ire of his more humdrum brothers for attracting all of this "undeserved" attention and making fun of their more conventional mode of becoming men. (Not that Joseph wasn't himself capable of heterosexuality -- he was -- yet the "Technicolor" suggests both the movie print process and the rainbow symbol -- even as the musical is popular with churches and even the LDS -- just look at all of the performances shown on Google.)

There was a video of this musical made in 1999, distributed by Universal and Polygram, directed by David Mallet.   (Apologies: "Raincoat" appears in the URL title because of an original typo; the correct title has "Dreamcoat".)
Posted by Bill Boushka at 2:00 PM