Thomas Keneally: Either Or 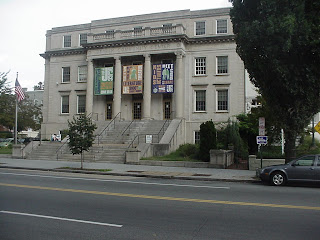 I saw this at a Wednesday lunchtime matinee (May 30, 2007), to a sold-out very professional crowd. Apparently theater matinees appeal to business people not far away on K Street or Connecticut Ave. (So do baseball games.)

The play gives a biography of the double-life led by Kurt Gernstein (Paul Morella), vacillating between prison and membership in the Nazi party, where he eventually became the head of SS Technical Disinfection Services at the concentration camps and helped introduce Zyklon B (hydrogen cyanide), which the Nazis used to replace carbon monoxide in gas chambers. Yet, Gernstein wanted to be a “good man: and frantically tried to get the word out to both the Vatican and other countries like Sweden and Switzerland. Each act of the play starts in 1945, where the Allies are debriefing him and may try him; then the play fashes back to 1933 (for Act I) and 1941 (for Act II).

One interesting problem of history is how the German people (referring to the Gentiles or practicing Lutheran and Catholics) were so easily taken in by Hitler and the Third Reich at a personal level. An early scene portrays the economic relief promised by the Reich, as well as the focus on aesthetic beauty (as in classical music) and personal perfection. But aesthetics were to be controlled by the state, not explored by individuals with personal freedom. Indeed, God (in the name of Jesus) had supposedly imputed the State with the knowledge of what is beautiful – the knowledge of “good and evil”. In our society, even with personal freedom, we become concerned that too much such “rational knowledge” in the hands of one person or a small number of people can become dangerous to everyone. Later, there is a line where Kurt is told to tell the SS what they want to hear as a “civic courtesy.” It’s interesting to watch how a promised economic or cultural liberation quickly turns into oppressive conformity with the state making up all kinds of criminal offenses to suppress dissent.

Curiously, you don’t hear “Hail to Hitler” (in any variation) in the play, and the subject of anti-Semitism for its own sake is little explored (although one character is a converted Jew going to a Lutheran seminary, whereon he is eventually kicked out). Dr. Edward Pruden, of the First Baptist Church of the City of Washington DC at 16th and O (the Church met in the JCC in 1954/1955 while its present building was being constructed), wrote a lot, in his 1951 book “Interpreters Needed” (Judson Press) about the failure of Christian churches (whether Lutheran or Catholic) to respond to the Nazi threat in the 1930s.

One other note: As I recall, the second part of Ayn Rand 's novel Atlas Shrugged is called "Either-Or".
Posted by Bill Boushka at 2:26 PM No comments: 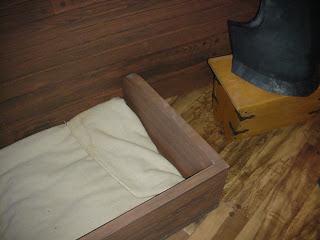 The May 2007 Pittsburghy Out has a story by Mike Crawmer, “Homoerotic Billy Budd staged by Pittsburgh Opera,” on p. 1. The story reports that artistic director Christopher Hahn had to deal with the controversy surrounding the opera by Benjamin Britten, dating to about 1951. At least one opera threatened never to come if the opera company ever put this masterpiece on. I saw this opera at the Kennedy Center in Washington in September 2004. The music from the opera formed the backdrop for the 2000 film by Claire Denis, Beau Travail (“Good Work”) from New Yorker Films, in a story about the French Foreign Legion in Djibouti, with a story that parallels the opera. There is a writeup here.

Britten died in 1976, had a long term relationship with Peter Pears that Leonard Bernstein would sometimes discuss with some candor. Since the onset of the current debate over gays in the military erupted with President Clinton’s adoption of “don’t ask don’ tell” in 1993, there has been a growing interest in whether Britten could have foreseen this issue when he wrote the opera.

The immediate subject is mutiny in the 18th Century British Navy. Since Britain is an island, its whole history and economic growth over centuries was based on the sea and on naval power, so it had to come to terms with the social issues surrounding men confined together for long periods of time at sea. In the modern Navy, the ultimate expression of this problem would be life on a submarine. The early colonists had this problem in their voyages to the New World, although sometimes families came together, whereas at other times the men came first. (That would be a whole subject in itself for dissertations, suitable for the Jamestown VA 400th Anniversary – family life during colonization – more movies and books, starting with New Line’s “The New World” in 2005).

But if mutiny is an issue, so would be personal jealousies and potentially sexual and homoerotic tensions. Britten surely knew this. In the opera, a likeable kid Billy Budd joins the warship. His “fatal flaw” is stuttering but he gets along with everyone except Claggart. When in a conflict Claggart winds up dead, Captain Vere tries Billy, who is executed in the tragic end of the opera.

Britten’s eclectic musical style combines British pastoralism with romanticism, resulting in a palette with stunning effects, as in the choruses (“Down All Hands”) near the end of the opera. He achieves similar effects in Peter Grimes, which I saw in Dallas in 1980. In that opera, a young apprentice dies in an accident, and Peter is accused of his death by the angry townspeople, with a suggestion of abuse. The same theme comes up in the ghost story chamber opera The Turn of the Screw (1954), where ghosts of people possibly suspected of child abuse inhabit a house with young children and a governess. Of course, Death in Venice (1973), which I saw at the Met in New York in 1975, has a dying older man chasing a young man in a cholera epidemic. The orchestral suite from that opera invokes a mood similar to that of the first movement of Mahler’s Ninth Symphony (1909), the movement that announced twentieth century music as we know it!

Britten, as a young man, was an admirer of Gustav Mahler. It is said that Mahler would have written a Requiem Mass had he lived longer, but Britten’s War Requiem(1962) may resemble what Mahler had wanted to write.

I have another writeup of Britten's music here.
Posted by Bill Boushka at 7:33 AM No comments: 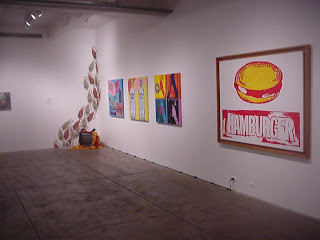 I visited the Andy Warhol Museum in downtown Pittsburgh this weekend. It is on the “North Shore”, two long blocks down from the Pittsburgh Pirates ‘s new PNC Park. When I tried to drive there, I got sidetracked in the baseball crowd around the park, could not turn onto the right street because of pedestrians, and got pointed onto an HOV lane (illegally) by a police officer. But eventually I got there.

I wasn’t in time to see the pseudo-opera Red Dust by Matthew Rosenblum (and the tickets apparently had to be purchased a couple days in advance) although I saw all the jazzy props on the second floor.

The tour started on the sixth floor with “6 Billion Perps Held Hostage: Artists Address Global Warming”. This exhibit did not allow photographs because of proprietary copyrights, and there were a number of interesting visual experiments. The most interesting as a little film where little “black holes” are shot into the air above Pittsburgh and they explode into smoke that envelops the sky.

The Fourth Floor had a special exhibit “Gift of Gretchen Berg: The True Story of ‘My True Story’ and The Troublemakers.” There are a lot of photos of the protests, and a glass cabinet with Time and Life articles about the Vietnam period, such as pictures of people being inducted by the draft (1965), and of the Kent State shooting (Ohio) in May 1970. That period covered my own Army service and first job of my “working life’. I was driving out from New Jersey to Indianapolis for a job assignment when I heard about Kent State (amongst all of those 800-835-3535 Sheaton ads – in a time when I was getting used to “the road.”). This was the other exhibit section not allowing photos. (All other sections did allow them.)

There was plenty of floor space to the more typical Warhol stuff (the soup cans and catsup and hamburgers). Somehow this all makes me think of a colorized “Last Picture Show.”

The exhibit “Buggin’: Taps for Justice” was largely roped off for renovation, but I could see a lot of the bugging from the lower tech Hoover eras. Good Night and Good Luck.

Earlier this year, the Warhol Museum hosted an exhibit on loan from the Holocaust Museum on Eugenics in Nazi Germany.

The Weekend Factory, downstairs, had people experimenting with the "silkscreen" art techniques. A friend of mine in the 1970s, Stuart Lamle, had a somewhat similar idea called "aquagraphics".

Warhol, it seems, wanted to make his mark on the world in his own way, without competing on other people’s terms. He changed the way we perceive art, and maybe even how what we perceive what is important in ourselves, just with his expression. Although he became a shrewd businessman, manipulation families or other empires was not his thing.

Related review of movies at the museum, here.
Posted by Bill Boushka at 7:32 PM No comments: 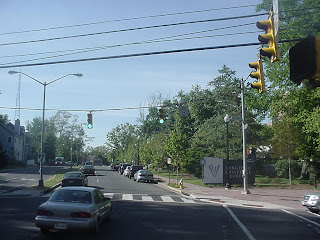 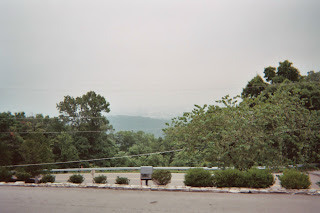 This play is a reverse adaptation, from movie screenplay to stage play. In present day, it is about the relationship between Shalom (Allan Kulalow), a veteran of World War II with total amnesia from a head wound, and Emma (Penny Peterson), a concentration camp survivor now facing chemotherapy for breast cancer. The story has Shalom discovering his former self through interactions with others and flashbacks. The cast includes Alex Zavistovich, John Sadowsky, Tinq Renay Fulp, Day Walters, and Dan Cullen. Some of the script does deal with the psychological issues of having to survive oppression collectively, even when one has to give up one's own goals in life, perhaps for group goals like a new homeland (in Palestine, with respect to the end of WWII).

The stage is small, and much of the atmosphere came from the artwork hung around it, much of it in black and white (one piece was an interesting tower that looked like it could have come from Clive Barker’s Imajica). I had the impression that the present day scenes would have been in color, and the flashbacks in black and white or muted sepia colors, in a film. Although in a stage play you have automatic 3-D, here one needed the resources of film and visual composition in order to delineate the story. The denouement, where Shalom is told that he is no artist, is shocking.

This play does sound like a natural project for The Weinstein Company some day.

This play and screenplay should not be confused with the French animated film (2006) from Miramax (ironically) and director Christian Volckman, with a moral that seems related. (Review).