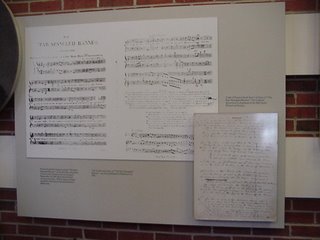 Today, Regal Cinemas in a number of cities simulcast a High Definition performance of The First Emperor, by Tan Dun.

The projection was on a screen slightly wider than the standard 1.85 to 1, but not full anamorphic. One wonders if Sony Pictures Classics or some distributor could purchase these performances for limited theatrical runs.

Placido Domingo (from Spain) was the Emperor, Paul Groves was the composer (as a character) and Elizabeth Futral was the princess. The opera is in two acts, with a little more than two hours total time. Beverly Sills of PBS interviewed Placido Domingo and the Metropolitan Opera stage manager for the extended intermission.

The music is a mixture of western modal, somewhat like Britten, with oriental melodies. There is a contrast between the complex harmonies, especially in the brass, and percussion rhythms, and the simple unison of the “anthem” that the Composer is supposed to write for the Emperor. The music becomes a metaphor for the political and social statement made by the opera. The Composer does not have artistic freedom, as the Emperor wants to approve every line. That puts the Composer in the political position of, say, Dmitri Shostakovich.

The other main plot has to do with the love between the Composer and the Princess. The Composer wants to prove himself a man and not just an artist with the Princess. But the Emperor wants his daughter to marry the General. She refuses to let him into the bridal bed for consummation (that is, she refuses to yield her body or her virginity) and instead commits suicide, becoming a ghost that will taunt the remaining men. In the end, the Emperor does not like the anthem, which seems lame compared to the music just preceding it. The opera ends with a percussion crash.

Tan Dun composed the music scores to Couching Tiger, Hidden Dragon, and to Hero. Film director Zhang Yimou is on the production team for the opera.

(Also, note the compositions of both director Clint Eastwood and Kyle (his son) in some films: Mystic River, and the two Iwo Jima films. Much simpler music.)
Posted by Bill Boushka at 3:23 PM