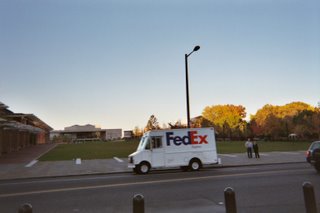 The National Constitution Center, at 5th and Market in downtown Philadelphia, near the James A. Bryce U.S. Court House and near Independence Hall, has a twenty-minute one-man play in the Kimmel Theater, showing each half hour, in which an African American relates the history of the Articles of Confederation, leading to the Constitution's writing in Philadelphia, to be followed by the Bill of Rights in 1791. The actor is surrounded by a multi-media show on an arena stage, with many of the panels in a ring above. (African Americans, it will be remembered from Colonial Willimsburg, were bargained with by the British.) The music sounds like the same music as used in the Jerry Brucheimer film Pearl Harbor (2001).

The Center also has a 9/11/ commemorative exhibit, "A Nation Remembers," 100 photographs of art, taken by Jonathan Hyman.
Posted by Bill Boushka at 7:50 PM