An alternate Symphony #7 for Schubert

The Kuhlau Channel offers us a “Symphony #7 in D Major, K. 708a”, performed by the BBC Philharmonic conducted by Juanjo Mena, orchestrated by Brian Newbould.

Now I’m used to the transcription of a 4-hand sonata in E Major as #7, and I like it that way.

The work is a piano sketch that Schubert never finished.

The first movement is playful, and the andante con moto is nice.  But a comparison with the Symphony #10 in D is not impressive.  In that work, the first movement is truly majestic (almost like a Bruckner Symphony triple Nulte) and the slow movement, in B Minor, could fit into a Mahler symphony as is. But the scherzo here is the same as the scherzo of Newbould’s 10th, and the finale is rather Haydn like here; in the 10th (Bartholomew, the Belgian performance) it’s playful but harmonically advanced.

I still see Schubert is a closer predecessor to both Bruckner and Mahler than any other composer (when you start with works like the Great C Major (really, the concept of the first movement is bizarre yet it works and thrills us perfectly) and the C Major Quintet, the latter being almost Mahlerian as a chamber work).

Second illustration: Embed from Wikipedia of sketch of F708a, p.d., click for attribution.

Posted by Bill Boushka at 7:05 PM No comments:

James Pavel Shawcross and “The Piano Forever” presents the Bosendorfer grand piano, on display at Kim’s Piano in Stanton (near Garden Grove in Orange County) California.

The piano has nine extra keys on the bass (to a total of 97), going down to another lowest C.  They were added in the early 1900s to accommodate an organ transcription to piano of Bach by Ferruccio Busoni.

Shawcross plays a piece that sounds like Chopin but I could not identify.

I wonder if Avid Sibelius would recognize the extra keys.

Imagine a work ending on a climax with a complete scale of the entire piano.

The picture comes from the Steinway store on 6th Ave in NYC (recent trip).

Posted by Bill Boushka at 8:27 AM No comments: 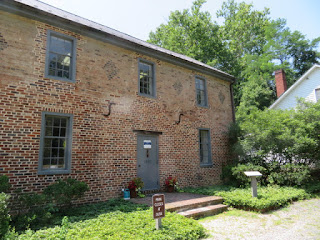 Here’s a postromantic symphony, Symphony #4 in E-flat Minor, the “Credo”, by Joseph Rylandt (1870-1965), Op. 55, composed in 1913 (when the composer was 43) and performed by the Het Symfonieorkest van Vlaanderen and Koor Novecento & Musica Flandrorum, conducted by Fabrice Bollon in 1965, when the composer was 90.  I guess I could have my huge Sonata #3 performed when I am that old?  “Credo” is Latin for “I believe”, and is a testament to faith.

The symphony, 47 minutes, starts out with a slow introduction on a theme that resembles Dvorak’s New World, and then a formal sonata allegro, and a quiet ending.  The harmonic style is Brahmsian.  The slow movement, Andante Sostenuto, in B Major, has a choral part.  What would function as a scherzo is a brief Moderator ma con moto, in shifting rhythms (sometimes waltz-like), slowing down to introduce the huge finale in E-flat Major, with a slow introduction to the chorus, which will focus on a hymn tune with many fugal -like variations, and a concluding triumphant chorus.

The work does remind one of Mendselssohn's Symphony #2, "Hymn of Praise" or "Lobgesang".

The composer wrote Catholic religious music, and vacillated between Flemish and often Dutch identity and liked the Dutch language.

Posted by Bill Boushka at 7:14 PM No comments:

Rued Langgaard's "Music of the Spheres"; somehow it reminds me of Schoenberg

InvertedNinthChord presents a most curious orchestral work, “Music of the Spheres” (or “Sfaerernes music”), by Rued Langgaard, composed in 1919 at age 26.

The tone pone is scored for large orchestra, choir and soprano with unusual soloists.  This performance is conducted by Gennady Rozhdestvensky  with the Danish Radio Symphony and Choir, with Gitta Maria Sjoberg, soprano.

The score is arranged to show odd symmetries on the printed score pages in some places, as tremolos of various instruments come and go.

Structurally, the piece is like a set of variations (35 minutes), with each variation a sequence of repeats of a motive, sometimes sounding impressionistic, sometime serial with hyperchromaticism.  The work has been compared to Lygeti’s “Atmospheres” but reminds one of Schoenberg in spots (it has key signatures but is semi-atonal in effect, with lots of tone clusters).

There are unusual effects, glissandi from a piano played on the original strings rather than the keyboard.

Some of this experimentation is done by modern composers today, like with various works from composers in the NYC Metropolis Ensemble.

This might be interesting repertoire to try as symphony orchestras reopen from the pandemic. Here are Peter Laki's comments for the American Symphony Orchestra.

There was a children’s science fiction novel in the 1950s (don’t recall the name) that claimed that in outer space you could hear “the music of the spheres”.

Posted by Bill Boushka at 7:55 PM No comments:

"Bach's Amazing Wizardry" as shown in one of the Goldberg Variations

He selects a variation in G from the Goldberg Variations, a canon in the unison, with very strict technical rules.

He explains the mathematical challenge of composition, which sounds almost like group theory in algebra, and bridges the earthly with the divine.

Posted by Bill Boushka at 7:17 PM No comments:

Was Rued Langgaard (1893-1952) the “Danish Bruckner”?  Or maybe more like Richard Strauss?  Actually, he ventured out as he matured (composing “Music of the Spheres” in 1916), which we’ll cover later.

But the Symphony #1 in B Minor (“Cliffside Pastorals”m BVN 32) was composed between ages 15 and 18, runs 67 minutes, with five movements: majestic opening and closing movements, two consecutive brief slow movements and a “Marcato” in waltz time as a scherzo before the finale.   The harmonic style is somewhat reminiscent of Richard Strauss (who also composed an impressive symphony in youth that should be performed more).

It dives in with a march tune as it opens, with a first movement in very expansive sonata form. The triumphant conclusion features a familiar hymn-like theme but settles into its final chills and fever that could go on forever.

Kuhlau’s post has an impressive picture of a domed city on an alien planet, which I embedded, with Leif Segerstam and the Royal Danish National Symphony Orchestra;  InvertedNinth has the same performance with score

The work was performed by the Berlin Philharmonic when the composer was 20.

Posted by Bill Boushka at 1:32 PM No comments:

Since Brittany Spears is one of the world’s most “powerful” pop musicians, the idea that she is still under conservatorship of her father at age 39 is shocking to most people, and even to lawyers discussing the case (where a judge refused to stop it) in corporate media (NBC account).   It is said that she cannot take her IUD out to start a family!

The stories indicate she has had numerous psychiatric episodes (but so have a lot of people, as I did from ages 19-21).

We have a world where adult children are more dependent on their parents, still;  but even when I started college at age 18 in 1961, colleges thought they acted in loco parentis, especially with females who often had dorm hours.

Posted by Bill Boushka at 8:23 PM No comments: