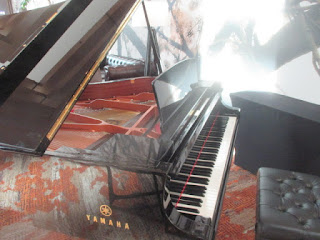 There has also been an interest in public pianos for anyone to play.  For a while there was a public piano near the True Food Restaurant and Angelika Mosaic movie theater in Merrified VA.  Composer-Pianist Timo Andres wrote about such a project in LA and NYC back in 2012, here.

I gave away my old Kimball spinet piano in Minneapolis (in the family since 1952) in 2003 before moving back to Virginia (as Mother’s last days would approach).  Now I use the much less bulky Casio (for composing). It sounds just about as sharp as a “real” Yamaha. 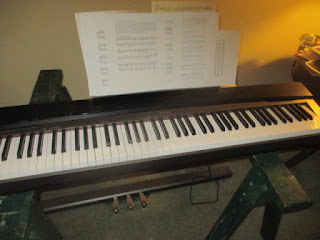 Posted by Bill Boushka at 12:25 PM No comments: 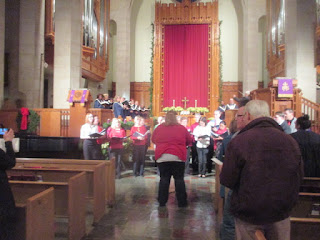 The First Baptist Church of the City of Washington DC held its 59th Annual Candlelight Carols service today at 4 PM.

There was an organ and instrumental Prelude (30 minutes) comprising Organ (two J.S. Bach chorale preludes), then “Il Est Ne” by Robert Leech Bedell, and “Good King Wencelas” as adapted by Virgil Fox, and “Bring a Torch Janette Isabella” as adapted by Keith Chap,man (Kevn Biggins as guest organist for these three pieces), and then a rather impressionistic sounding setting of Adeste Fideles by Sigfird Karg-Elert.   There were also six carols for brass quartet adapted by Jim Lucas.

The Combined Choirs performed the major anthem "Christmas Day: Choral Fantasy on Old Carols" by Gustav Holst, and “The Angels’ Song” by Paul Tschennokov (which was surprisingly simple and brief).

The First Baptist Church choir performed “God Is Born Among Us” by Malcolm Archer.

Organist Lon Schreiber also played “In Dulci Jubilo” by Marcel Dupre as an offertory (for “SOME”, So Others Might Eat).  Remember “Cortege and Litany”>

Posted by Bill Boushka at 7:28 PM No comments:

Another anthem by Jane Marshall for Advent 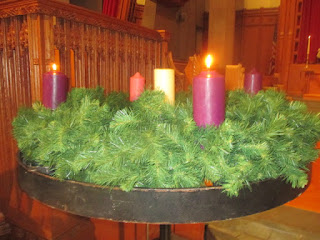 Today, the Second Sunday of the Advent season, the First Baptist Church of the City of Washington DC performed another Jane Marshall (Dallas composer) anthem, "He Comes to Us".

Some versions online seem longer and end loudly, but as performed today the anthem ended quietly.

I found another version of  "Our Eternal King" performed in 2009 by Schuler's Hour or Power in the Crystal Cathedral in Anaheim, CA, link here.  The Cathedral was sold to the Roman Catholic diocese in 2013.  I had visited it in person in May 1986, and in a communion personal prayer, I offered that i was (at the time) an assistant buddy for some persons with AIDS (when living in Dallas), and the celebrant responded that he thought I was taking a real risk! Medically, the answer was no, I wasn't.

Also performed at FBC this morning was a gentle hymn "Still" by Jac and Kathy Whatley  (I knew someone by that female name in Dallas). The organ prelude was "O Come Emmanuel" by Leo Sowerby and the offertory was the "Song of Peace" by Jean Langlais.

The pot-luck brunch was followed by a children's Christmas story based on Matthew and Luke, in the Fellowship Hall, 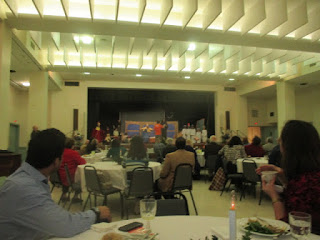 Posted by Bill Boushka at 11:33 AM No comments: