National Museum of the Marine Corps 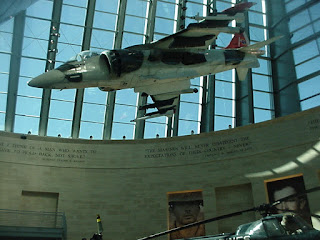 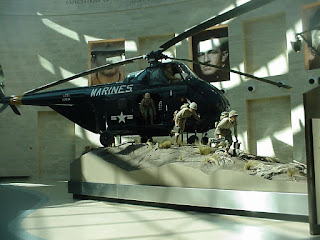 Although this may not quite belong on a page accentuating live theater, certainly a visit to the US Marine Corps Museum -- officially called the National Museum of the Marine Corps, website here, gives the visitor a similar experience. The visit is free, and the museum is located about 35 miles south of Washington on RT 1, West side, near the Quantico Marine Base, and just off I-95, not far from Prince William County Park.

There is a huge atrium with various Marine aircraft, but the main part of the visit comprises all of the arcades for various USMC historical periods back to World War I. The largest arcade may be the one set up for the Vietnam war, with a live diorama, graphic models of the wounded, and a "Home Front" display of news clips (such as Johnson's famous "I shall not accept" speech in March 31, 1968, when I was in Army Basic at Fr. Jackson) on various television sets of the era. There are some basic training displays, including a foot and wall locker inspection, and a bunk exhibit showing how close and primitive the living conditions are (which might have been construed as a reason for "don't ask don't tell").

There is a gallery of combat art from Iraq, and there are a couple of theaters, one showing black and white combat news reels from the 1940s, the other showing in high definition CNN's 2003 film "The Road to Baghdad" about the fall of Saddam Hussein.

It's well to remember that for about a year during the Vietnam period, people could actually be drafted into the Marine Corps. There is a red placard in the arcade area that reads "Every Marine a Rifleman."
Posted by Bill Boushka at 6:14 AM No comments: